Saturday morning, I thought that I’d drop by to see the wonderful people of Tech65 during their live recordings. 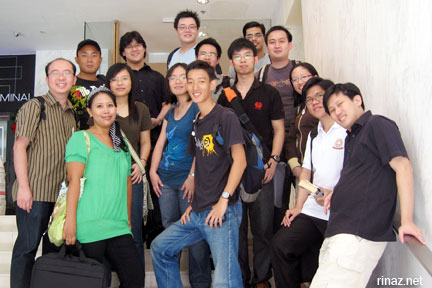 The group usually recorded at Geek terminal, however I’ve been told that its been closed down. So a quick check on twitter shows that they are having it in the new Hackerspace instead.

It wasn’t difficult getting there since Arab Street was one of my favourite place to go to in Singapore. Unfortunately, by the time that Cart and I arrived, the group has already finished their recording. Also, a number of the members wasn’t there. Daniel was in Hong Kong, Nicole was away. But I did managed to meet dear Fari who was still as adorable as ever as well as the amiable Justin who was one of the co-owners of Hackerspace.

Fari showed us around Hackerspace and I saw a very interesting looking area. At first glance, it looked like a spa where you could get massages or get your nails done since there were draperies everywhere. But in reality, members could do their work in a quiet environment.

So quiet that we chanced upon this : 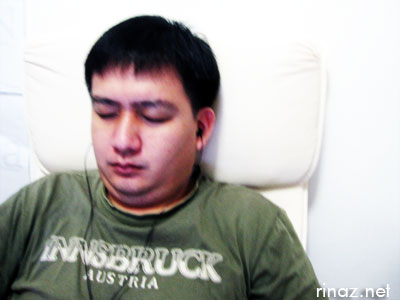 Cart and I stayed a while to join in the Android enthusiasts gathering and it was really amusing to see all the coders trying to get the answer right for the Dont forget the lyrics game.

I have to admit that I was really horrible. I had my trusty S10 with me. So I googled the lyrics and nudged the competitors with the answers.

We said our goodbyes and Spai joined us later for lunch. I suggested that we had lunch at Cafe Le Caire since the food that I had there the last time was really tasty.

Unfortunately, this time round. The standards has really dropped. The service was so slow. It probably took a good 20 minutes till there was someone to serve us. Even then when I asked the server about the food, he didn’t know anything! Oh horrors! 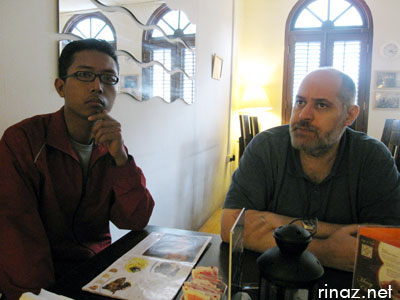 The worst part is, I didn’t liked anything that was served.

I spotted these cute wedding bears that I stumbled upon on our way to go to Funan Center. Speaking of weddings, Cart and I stumbled upon a wedding shop and I saw a very beautiful wedding gown. Cart said, “You like that dress? Well, those days are over now”.

I passed my new namecards to Tommyprint which I’ve edited with Italian words and ordered 300 copies. Although now that I think about it … why even bother? I’ve never been to any Italian events ever. I even missed the Rome blogfest that was held last year. Hopefully this year would be better 🙂

Anyway, we headed back to Arab Street to have dinner at El Sheik with a couple of my wonderful blogger friends : Nicole, Xinyun, CC, Lycan, Foxtwo. 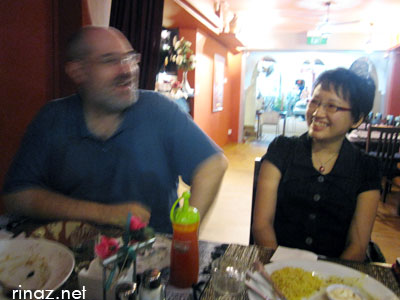 It was a lovely dinner. But it was too bad that they didn’t do their mixed appetizers any-more though.

I don’t remember what we talked about, but I remember that it was really nice hanging out with them. Xinyun and Nicole even handed me gifts and it made me so emotional that I really teared up after that.

Later on, we adjourned to this place called Coffee Culture, I think. Passing through Arab Street at night is an experience. Smelling the sweet smoke emanating from Shisha’s. And soon after, we reached the coffee place.

I had a really nice coffee with ice cream on top.

And then, CC went to the display shelf and took out a deck of cards. And interestingly, the first card that he pulled out was this : 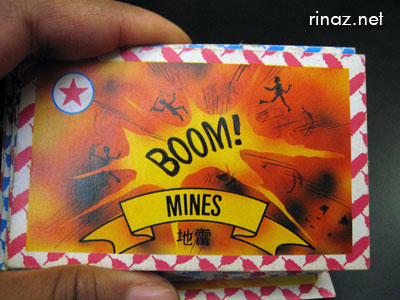 The next day, Cart, Spai and I got ready to head to Royal Copenhagen Tea House for a little bloggers gathering.

What was supposed to be a chichi experience turned out very different though. Things didnt seem to start well. The first thing that Spai noticed was a scary looking lady with tattoes and too tight revealing clothes drinking tea. To me, my visions of having a queenly, upperclass, royal tea faded as soon as we entered the dining area.

It was SO noisy! Like hawker center! In fact, I’ve seen crowded hawker centers which was more quieter than this.

The only saving grace was that the food was pretty good.

I liked everything that I had, especially the scones. It was pretty delightful. Maybe the next time that we head back to Singapore, maybe we could go and have high tea at Fosters instead 🙂

Anyway, it was nice meeting my friends again – there was Daphne, Furry, Jean, Alice, Brokenshardz, Hendri and Aaron.

Here are a couple of shots of us : 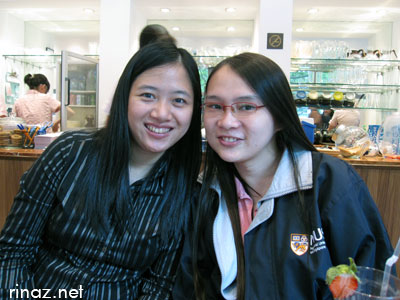 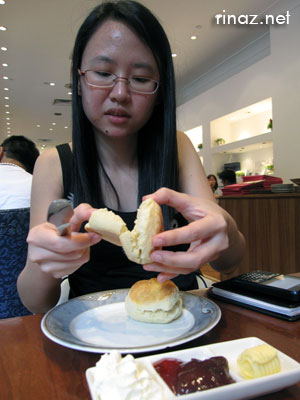 Tstar looking at her scone

And here is Cart being action shy.

Later on we said our goodbyes and headed to Coffee club. I just couldn’t take the incessant noise at Royal Copenhagen. 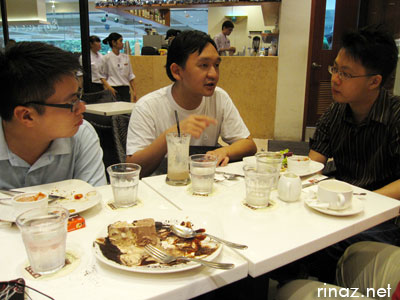 And here is Brokenshardz, Hendri and Aaron talking about sociology. It was interesting and yet horrifying to hear of people being in danger and yet no one is moved enough to do anything.

I had a similar incident, but thankfully, it wasnt as serious.

The next day, my best friends Juli and Hema asked us out for dinner at Juli’s favourite Indonesian restaurant in Lucky Plaza. Ooh. The food was so good that I forgot to take pictures of my friends! 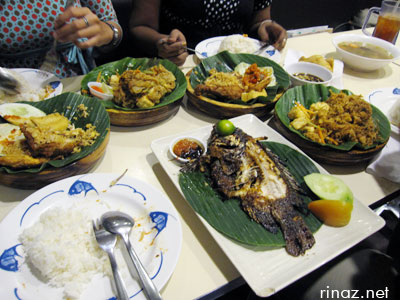 It was so good that I’m having mild palpitations just looking at this picture. And the waitress was so kind and friendly too. Once she found out that Cart was vegetarian, she took special care not to mix the food together and even offered to separate the meat products from being added in the gravy. And Cart could try Indonesian food! 100 points for being so nice. 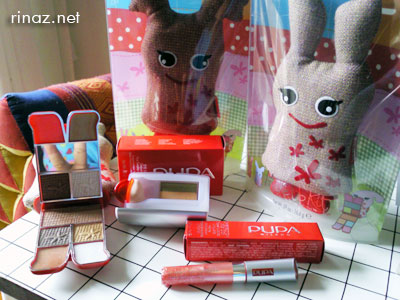 I got my best ladies a couple of Pupa cosmetics and till this day, I feel like kicking myself for not taking a video as they were pulling out the presents. Cos all through the while, they started to argue at who had the cutest present. LOL!

And we adjourned to Orchard’s new mall, the ION where of course us ladies headed straight to the magical land of Sephora. Cart’s already lost me by the time we stepped in as we ooohed and aaahed at all the branded cosmetics. Hema was looking at the Benefit cosmetics, Juli was looking at Bare Escentuals and I was hypnotised at the brushes that Sephora had. So many!

I was trying to be frugal since I still have quite a bit of mekap that I’ve yet to finish. But I couldn’t help but get a couple of items. 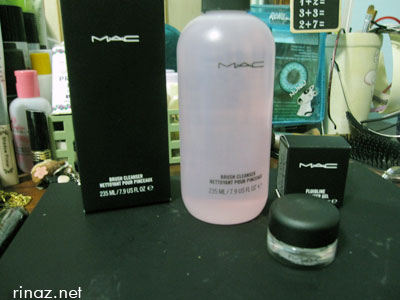 Ladies and gentlemen, I am now a Mac Whore.

Sidenote : Speaking of whores … I just made a fan page! Yes I am now carrying my own basket so go on and join my fan page 😛