Mother taught me how to make Roti Jala this morning. It helped me take a number of things off my mind momentarily as I slowly moved the utensil slowly on the wok. 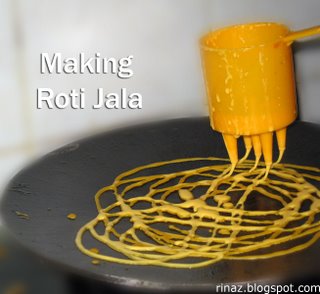 Roti Jala is something that I’ve always liked to eat but didn’t have the opportunity to make till only now. 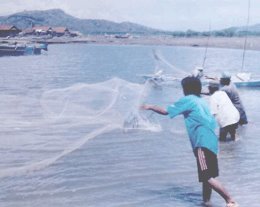 It was pretty simple to do with just a few eggs, flour, coconut milk and a little bit of salt and abit of tumeric for the colouring.

The batter would be placed into a funnel with many holes below it and then slowly poured into the flat wok that mum specially bought from Little India.

The first try I did wasnt so good 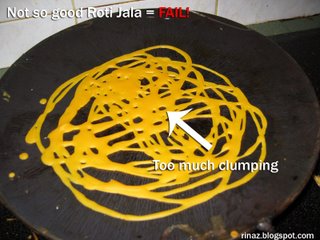 By right, there shouldn’t be much clumping on the batter. I must have poured it in too quickly till mum adviced me to pour it in slowly and with love.

“Cooking with love! Thats what Anita Sarawak said when she cooked. First time when people heard it, they thought she was crazy! Cooking with love? I’ve got no time to cook with love! As they think about wanting to spank their children for being so naughty or the neglectful husband. That’s why their food didn’t turn out so good”

So I slowly poured in the batter carefully and took my time and it did look better on the next try. There must be something psychologically calming about this as I slowly nurtured my little pancake into the crispy golden lace that it was supposed to be.

And it’s supposed to be eaten best with chicken curry. 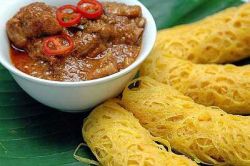 Mother didn’t have time to make the chicken curry, so we ate it with chilli squids instead. It was new to me but, food is food. And food is always usually good.

I’ve been quite depressed for this week with many things on my mind like the A levels, sometimes I feel like I can’t cope with it with my demanding job taking up most my times. So I feel helpless and unprepared.

And I’ve been depressed with the realisation that my money is rapidly depleting with the registration of examination, the classes and the extra tuition that I’m taking. It unbalances my goals and now I can hardly save up for the many things that I aimed for.

And I’m feeling depressed because of the issues at home.

I don’t know. Maybe I’m just being childish. People always say that there are people who’ve got worse problems than you do. But I can’t help but to feel extremely sad. Like everything is pointless. Sometimes I feel like I just want to end it all.