I left the house screaming at about 7.45 am this morning. I was supposed to be at the Canon DMH Building in Bugis by 8.30 and it took about an hour train journey from home to there. I quickly took one gulp of ovaltine and one bite on the fried egg sandwich and quickly fled out of the house. 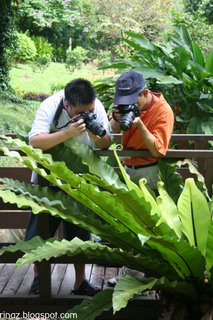 I was hurrying to attend the “Nature’s little gems” workshop which was organized by PhotovideoI. I’ve been a member for this group for quite a while and have been to one of their activity last year.

I reached the destination at about 8.40 and thankfully, I wasn’t so late. In fact, there were a number people who were still queueing up to register for the workshop. I quickly made friends with the man in front of me. Ram was his name and he tells me that he was interested in photography for about a year and enjoyed nature photography the best. He showed me some of his magnificent pictures of different animals and I was impressed by the hummingbird picture that he took. It takes a lot of patience to snap a picture like that.

Soon-after, the editor of photoi, John Cosgrove announced that we were about to departure and are welcome to borrow the cameras and lenses. Ram quickly borrowed the Canon 5D camera.

The Canon EOS 5D camera was way superior to my Canon EOS 350D. At the super high res of 12.8 mega-pixel and a super fast multi-burst image capability, which means that you can take many shots back to back in just a click, it was superb. I especially liked that fact that the body now has an adjustable dial that changes the ISO and aperture immediately. Something that I didn’t like about my camera. I had to fiddle with alot of buttons to change it. Not good when you want to take shots in an instant.

And then Ram took out his super sweet Canon lens. I think its the Canon EF 70-200mm f/2.8 L IS USM Lens and attached it to the 5D and quickly handed it to me.

Ram: Take that picture of those sparrows there.

Ram: There! (points to the fence about 5 meters away)

I quickly aimed and shot a picture of the sparrows. And oh my gosh. The image quality was breathtaking. It’s amazing what the right equipment can do to your pictures.  wish I had the picture, Ram deleted it at the end of the workshop to save space on his CF card 😛

Me : Oh my gosh. I love your lens. I won’t be able to sleep tonight. I’ll just think about the lens, all the time. How much is it?

Me : Ah? *Gulps* That’s like two months pay for me

Ram : Its a good investment for beautiful pictures.

Ram : I guess you just have to starve yourself then

We reached Alexandra Hospital Nature Trail a few minutes later and we began our shot. I was close to being intimidated! There were so many professional equipment all around that even with my robust camera, I felt so small. Many had their own telephoto lens and were happily snapping far shots of moving butterflies and other creatures.

I couldn’t do a macro shot with my lens without going to the subject really closely. Forget about the butterflies. Do really you think they would want to pose willingly and sit quietly when I ask it to?

So I shot the to the best of my abilities, mostly of things that didn’t move too much. 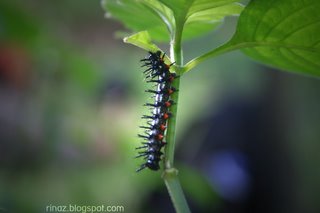 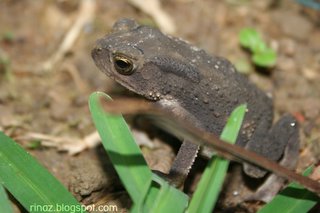 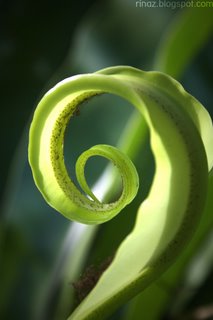 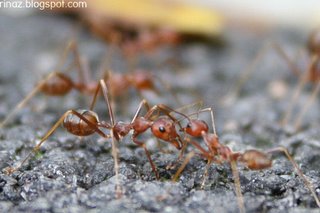 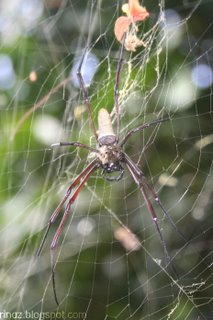 What do you think of them? I got lucky with the butterfly shot as it landed quite close to me. I stood still and waited and moved slowly to snap a picture without scaring it away. Very cool. My first butterfly shot! 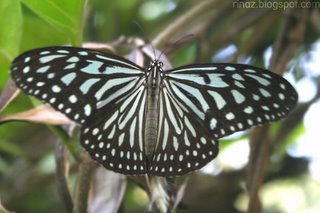 We also found some interesting creatures like this HUGE caterpillar and HUGE spider which I wouldn’t have noticed if I just walked there on my own. These animals really blended well with the environment. 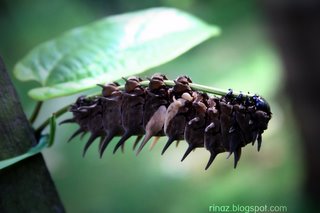 I had the good chance to try out a telephoto 100 lens that allowed wonderful macro shots. Unfortunately it weighed about 2 kilograms. I wasn’t able to hold it for a very long time without my arm straining. After a few seconds, focusing on the caterpillar, the lens drooped little by little.

“That’s why we carry tripods”, chuckled a man beside me, looking at my antics.

We wrapped up the photo-shoot at about 11 and printed our best work and we compared our photo with the others. There were so many beautiful shots from different angles. I really enjoyed looking at them. 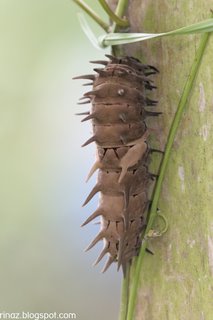 John took a look at the picture that I printed out and said that it was good. (shocking) He also said that different people have a different story to tell and if a picture makes you stop to look at it then, its a battle won.

So, does my pictures make you stop? 😉

*Next month’s photo-shoot would be “Food Shots” – Come and join me! I’d love to go for the next one 🙂

9 Replies to “Macro shot meet with PhotoI at Alexandra Hospital”