Don’t you think that there’s heaps of blogs around? I even see blog makers from friendster, Zorpia, myspace and Hi5. It’s a bit much. At least it gives us more choices on which to choose. A few of the notables ones below:

I don’t usually use Yahoo Messenger that much, but the updates in yahoo looks nice. There is a drag and drop feature for the photos that I liked. And more animated audibles. I don’t use them that much, but I liked it never the less. And hey, what’s this? A Yahoo 360 page

Gave it a try, and I kind of liked it. In just a few minutes I was able to create my own 360 page. 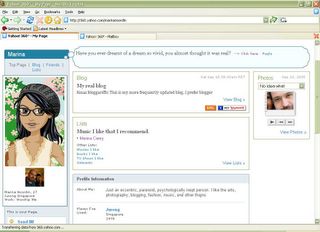 What I liked about it is that I was able to set a flash as a profile picture using the yahoo features. Remember paper dolls as a kid? You chose the hair, the hat, the clothes, very similar to the profile picture. I dig that and she blinks too. The blast feature next to the picture is pretty nifty too

Creating blogs was easy and I did that in just a few minutes. Again, the drag and drop feature for the images were really nifty! I was very pleased to see that Yahoo supported Firefox, my choice browser over Internet Explorer. However, the one thing that flawed it a little was that it wasn’t really customizable. I can’t change the background to green. There is no templates for it at all. Pity.

MSN Messenger, the other IM program that I use also had MSN Spaces, which has been around for a while. Easy to use, and very user friendly, it allowed users to drag and drop in photos using their own software and I liked the part that one is able to move the boxes around. I thought it was nifty. 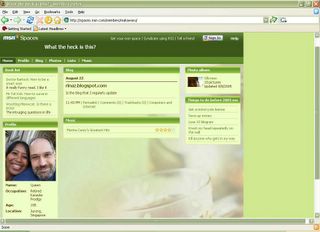 Nice templates, wished that there were more but it was okay for the moment. You can pick the colour for your blog. No customized templates though. And whats worse is that it wasn’t friendly with firefox. The picture feature doesnt work, the drag and drop didn’t work, heck nothing much works in firefox with msn spaces. Not my cuppa tea

* Doesnt work well with firefox
* Problematic even with Internet Explorer.

Everyone is getting into blogging. Even schools are promoting blogs. Got to know about this website while participating in the Inter schools moblog competition 2005 It was quite a standard moblog, not much customization except for maybe colours and such. It allowed photos from mobile phones and what I liked about it was that people HAD to register to the blog using their phone accounts to prevent spamming. It made it a more safe environment for kids. 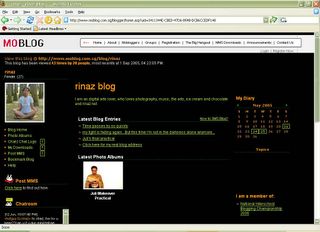 It was not a bad blog. In fact, it had many friendly people in there that would take the time to say hi though the chat box. But personally it was a little too bleh for me. I think it could be better, if it was easier to use instead of having so many different pop up windows opened. I could imagine that the kids who aren’t used to blogging, would have complications trying to understand how to make it work.

* Not so easy to use
* This author doesnt like the interface

I was surfing through my favourite forums where there was a link that needed my registration to livejournal. Gave it a try. It definitely isn’t for me. It was not so easy to use. And I am sure that it is not customizable, I don’t see anywhere I could just point and click. Urg. 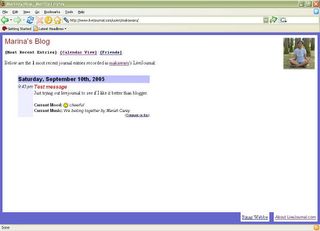 I do like the fact that users could categorize their posts. Like this post could be filed under the topic “tech” and the post below under “daily life”. Plus there is a mood indicator, which is amusing.

* Not customizable
* Not so user friendly
* Its so blah

Ahh … Le Originale bloggarrific. Brings back memories as I tried to use it again. Rinaz bloggariffic will still be there if it weren’t for the fact that it was deleted because I forgot my password after a couple of months. I still wonder what the previous posts that I wrote were. Anyways, again, a straight forward blog, the only customization that you can do, is the colour change. 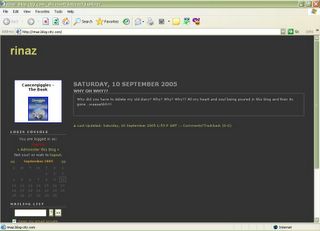 I liked the short url too 😛

* You left me, I don’t love you anymore

Last but not least

But before I changed host, I gave their blog a try 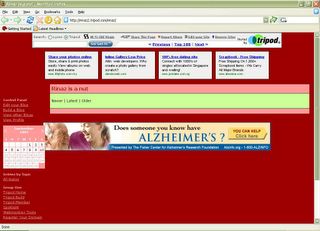 Call me biased, but I don’t fancy their blog . Yuk.

I still prefer blogger. It’s straightforward, allows you customization and still relatively easy to use. However it would be nice if there were more done for those people who aren’t very familiar with css and other net jargon.

I’d like to do a customized page with my own banner and background. But I don’t even know where to start. Yahoo 360 is a strong contender for the moment. Lets see how it goes.

But rinaz bloggarriffic will be here for a long while as me likey blogger. 🙂

10 Replies to “Don’t you think there are too many blogs around?”