The latest hot topic in Singapore is about a woman who made a racial comment online last weekend.

The woman, Amy Cheong, former assistant director to NTUC was upset about the noise coming from a Malay void deck wedding and she posted this on her facebook account : 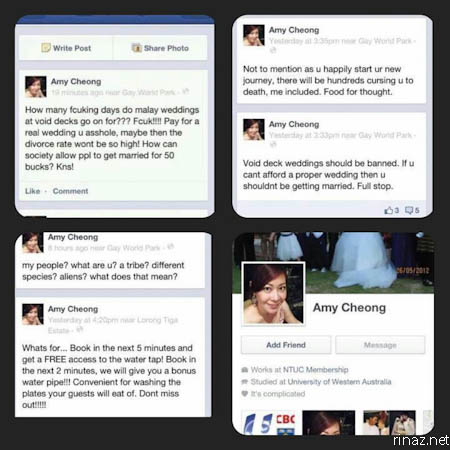 The first time I saw the comments, I was ambivalent about it and pretty much dismissed it. In my mind, I thought, “Gee, what a dumb thing to say“. I was more disappointed rather, as these were words of a socially uneducated person (regardless if she went to university)

But the reverberations were fast and her post became viral. In a matter of hours, there was a significant amount of outcry online over her words.

It was understandable, as people seem to always be fascinated with “the bad” (which is why there’s always a traffic congestion when there’s an accident even though there are 4 other free lanes, as everyone slows down to look for any trace of gore and whatnots)

As expected, I see my timeline filled with replies, and I can feel their genuine anger. But what bothered me more is how emotional and quick the online community are at judging her and crying out foul and for her virtual murder.

Rather than discussing the issue like civil people, we think with our pride and ego. Gosh, is this really how we want to be perceived? That we are a community of mobs?

It’s as if someone makes a passing comment while walking, and if another hears it and doesn’t like it, doesn’t give them the right to form a collective group to beat that someone up. That’s bullying, regardless if the person deserves it or not.

Just to be clear, I’m not condoning Amy Cheong’s actions (moreover, don’t you think that she’s already been duly punished already?) But I feel, we should be more gracious and be a little less emotional especially online, where media is usually more fantastic than what it really is. Like the extreme anti-religion protesters are only 0.007 of the entire community. Mass media made it seem like it was more.

It’s always easy to react, especially online when information is transferred so quickly. The beauty of being human and freedom is that everyone has the right to think what they want. But each person should be responsible for what they convey

Each of us have a choice in how we react. Be angry and finger point – leaving the problem unsolved and widening the gap OR we could educate and have a more understanding and open minded mentality with each other (not just tolerance)

To be honest, if someone were to say to me, “Malay weddings are low class and costs only 50 dollars“, I’d genuinely be surprised and and wished that we had that person as our wedding planner! And if someone says to me, “People who have void deck wedding are idiots as it will lead to a divorce“, well I’m just happy that my marriage with Cartcart is still going strong. 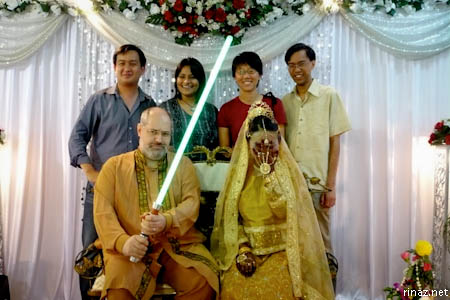 (What does the cost of a wedding got to do with the happiness of a marriage anyway?)

Why take an allegation personally, when you know it’s not true? Rather than reacting negatively, we need to be the bigger person.

And as for me, I’ll just relax one corner and play my guitar.

4 Replies to “My two cents on Amy Cheong”