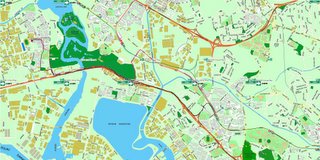 Awesome! We cycled about 12.5km all the way to Clementi and then back again. When I reached home, my legs felt like jelly and felt like it was about to fall off.

Well, thats what you get for not exercising for years! I was so tired that I went to bed early from the exhaustion.

To be honest, I was more amazed than anything as if we took the bus or the train from where we started, it would take a good half an hour to 45 minutes to reach the destination. If taking into the consideration for waiting for the bus to arrive, and queueing up and other things.

Compared to public transportation, cycling felt different too. We could slow down and look at the different sceneries, breathe in the fresh air and stop where ever we wanted to.

We travelled mainly by the AYE highway (quite dangerous I know, but unfortunately the sidepath wasnt big enough for bicycles) and used the pedestrian path as much as we possibly could.

Thankfully, it was still a ghost-town because of the Chinese New Year and there were hardly anyone around the sidepath and there wasnt that much traffic on the road.

I could breathe in the ‘jungly’ smell of Teban and see the scenic view of Pandan River. Nothing beats the feeling of the simple joy of rolling downhill on the bicycle with the wind in the face.

We reached Clementi in about 30 mins. Ahh .. clementi. The place where I spent alot of time, during my days in Jurong Institute. Plenty of memories here as I walked around the area with my brother.

I told him of how I had to leave the house early to get to the Clementi Interchange to get to school on time. And how we spent time roaming around the different shops when we needed a break from all the studying.

There were hardly any shops opened but I reminisced about the area.

There were so many memories.

Like the time when we still had A&W Restaurants here. A couple of friends and I would go there on Tuesdays to order mugs of Root beer (in those lovely frosted mugs) and Coney Dogs and sometimes waffles with ice cream on top.

I also encountered stupid situations like having blind dates over at A&W. Ahh the carefree stupidity of youth. In fact, many of my teenage blind dates happen at fast food restaurants. I wonder if I should make an advertisment script for that 😛

Camera zooms in to a girl in A&W, gingerly sipping her root beer and looking expectantly for her date to come.

A boy comes in, with a loud shirt and overdone hair – he just looks odd!

Girl is repulsed until he whips out…

And they both beam at each other and the girl bats her eyes, just for good measure

Erm … Okay, that sounds like a horrible advertisment. Furgedisaidabouddit.

We dont have A&W in Singapore anymore. It was still nice to remember the memories there.

We walked around and explored the area and saw many changes. Some shops has moved, like KFC wasnt at the cinema building anymore. The shopping center seems to be gone and a mysterious pizza hut and a Karaoke Lounge just popped up on the building where they shared with the polyclinic and bigbookshop.

But no dramatic things much has changed there and it looks pretty much the same as it was about 10 years ago. Err … even smells the same.

My bro and I stopped by the hawker center. By now, we were extremely thirsty and needed a break. Fortunately for us, there were still a few stalls opened and I decided to have dinner there too.

I ordered Indian Styled Mutton Chop (which is basically marinated meat in spicy tomato sauce, usually served with fries and half fried egg) 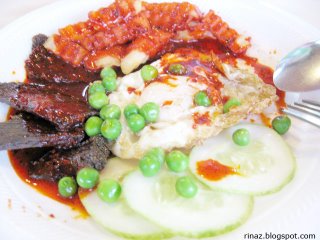 It wasnt that tasty though. It was tad bit too crispy when it should have been soft and melt in your mouth. The portion didnt justify the price either. ($4 for that? Bleh)

Bro had sop tulang which was basically cow bones cooked in savoury sauce. It takes skill to eating it as there are still precious meat left on the bones and the insides of it are the best thing to eat. 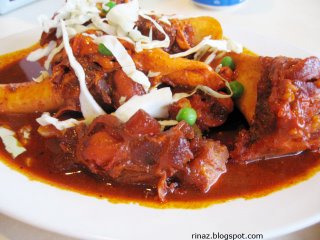 It was pretty alright. It wasnt the best sop tulang that I’ve ever had, but it was decent. the best ones would be the ones in arab street or that hawker center where Juli and Hema and I discovered when we wanted to buy tickets for our penang trip… Oh I’m craving for good sop tulang now …LOL! Maybe I could persuade someone to go out with me later 😛

While eating, I had a thought though. About the promotion of Singapore culture. Tour agencies can promote all of the landmarks that they can here, but there is hardly anything authentic about the whole situation.

What they do, is nothing really special. Organized tours … Ho-hum! In the end, they would go back and think that there is nothing to it here. It would be so much better to experience things in the local’s context.

Eating at hawker centers like a local. Having the chance to mingle with the locals. Living in a flat, like a local. Even enjoying local hobbies.

Which travel agency has ever promoted the joys of “mahjong” or “community center events” or even “karaoke competitions”. I know that it sounds very radical but we wont know till we give it a try, right?

Something that the Singapore Tourism Board hasnt done yet and which I’m looking forward to.

I mean, all the Haw Par Villas and the Sentosa Resort is fine but we also need something authentic. I’d like to show my dearest something that I enjoy doing, and going to, on a personal basis.

Anyway, I’ll stop here for the moment. Till the next time.

3 Replies to “To cycle from there to back again!”