Oh sweet! Look at what was just delivered this morning. Yay! 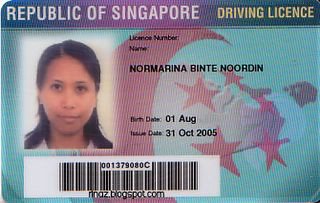 The coy and demure pose

Tried to call up the vespa showroom but there was no reply. Thought it would be nice to try out the different scooters before making my mind up about which one to get.

I dont mind slightly heavier bikes. (Not too heavy though!) Because they are more stable but I don’t think I could get a bike which is too tall. If the balls of my feet can’t touch the ground, that’s no good.

Anyway, been looking at tomorrow.sg when an article caught my eye.

In a nutshell : A blogger here in Singapore was nominated as the hottest blogger Apparently, she was noticed by a local talent agency to sign her up with MTV.

I read about that a few days ago but I didn’t think about it much. She’s a very pretty girl and she’s very lucky to be signed up with MTV. 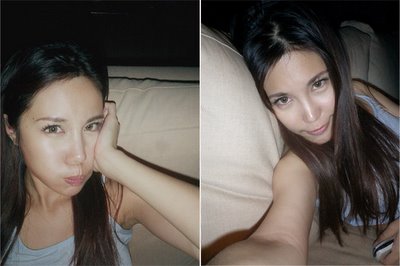 What an adorable face

I mean, I wish I was as pretty as she. But I’m not. So I pretty much abandoned all my hopes to become the next popular pop-star/TV host/singer/ and just forget about it. (Haah? No more Marina Carey? Boring)

However, I wonder why talent agencies or TCS or any local media here seem to favour more of the Caucasian look and then the Chinese. There is very little, if none at all Malay or Indian actors and actresses, models used for advertisements.

Even Taufik Batisah, the winner of the Singapore Idol competition, seems to be completely non existent in the TCS 5 world. Save for the one drama series, Shooting Stars and the 7-11 commercial. Sheik Haikal, Norleena Salim, Kumar … Where are they now?

My classmate, Adi, believes that the reason being is that Caucasians have much more appeal than the other races. It all boils down to marketing, people with more appeal, generate more revenue.

But I feel that the lesser fairer races also have their own special appeal. Who is to say that Indians and Malays don’t?

It makes me sad to see biasness in the media when in actual fact, most Singaporeans are in a melting pot. We interact with each other in daily life, we have best friends with each other, we even form relationships with each other. So what’s up with the one sided view?

Yes, I would like to see more diversity in races in the media. What can be done to promote it? I wish I knew.

11 Replies to “I’m not gorgeous but its okay”