I had a company meeting yesterday. Since the location was further on to the Eastern part of Singapore, I travelled for the first time on my scooter to the ECP expressway. 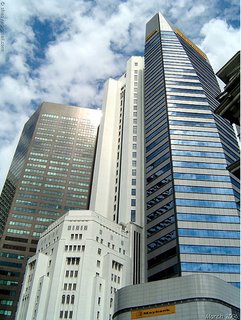 Which makes it quite amazing that just about two years ago, this same place, made the entire nation in a moment of trepidation as they listen to the news of the Nicoll Highway collapse incident.

It was a long ride to the boss’s house. With no form of entertainment for me except for to look at the crazy motorists on the road zig-zagging without prior signalling and to curse and shout at the taxis suddenly cutting in my way.

At length, I reached the Boss’s place and met and mingled the other educators and staff there. There was Dzul and Deanna, both of whom I met while during our orientation days last year. 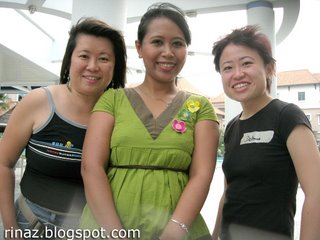 My previous supervisor, Mei Yun, me and Deanna

It was the typical motivational speech, company vision, new things that will come for the future and what nots. Some people might be cynical about these motivational speeches. Granted that I include one of them sometimes, but at the same time though, I felt quite blessed that I was with Asknlearn after all that I’ve been through with the previous companies that I have worked with. 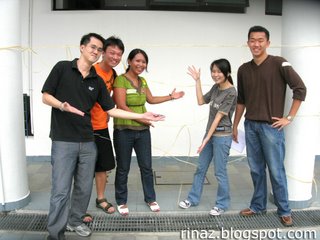 Our game team posing next to the ‘spiderweb’ that we broke

Working life understandably does have its problem but at least I can ask them for help whenever I feel that I couldnt cope with something. The best environment is where everyone feels they belong and look out for each other.

I was supposed to meet up with my friends Vai and Juli in Orchard. After getting lost around the roads for a few minutes and screaming, “Where am I? Where am I?” I finally managed to stumble into the city area and then got myself stuck behind a procession of taxis and cars then magically finding myself entering a carpark behind a shopping center complex.

I can feel the eyes of other motorcyclists as they see me park my scooter. I was the only female rider there in the already full parking area.

I swooshed out my hair like a shampoo commercial and sashayed out of the parking lot.

Anyway, I met up with Vai first and updated each other on what’s new in our lives.

Me : How did the birthday event go?

Vai : It was great! Thank you for helping out in the powerpoint slides. It was spectacular. Her entire family loved it.

Some while after, Juli turned up and the playful catfight began.

Vai : Ah, someone went shopping I see. No wonder you are late.

Juli : Excuse me! This is for school. We are having a dinner function at a community center!

Vai : Community center? That’s such a cheap place. I had mine at a hotel!

We went to lido to watch this movie called pretty persuasion which I throughly enjoyed. It was a satirical dark comedy with spectacular dialogues and perfect characters which a rather shocking ending. 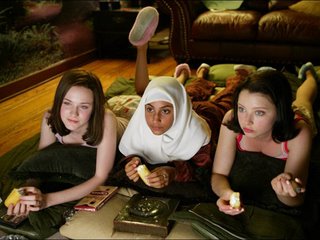 The night ended much too quickly though with Juli needing to leave to get ready for her marathon the next day.

Vai : But I’m sick! Who knows if tomorrow I would die!

Vai : Why doesn’t Marina go for it?

Juli : That’s because she never signed up for it not like SOME people who sign up for things but never turns up at the last minute.

Vai : You women are always ganging up on me.

I have the funniest friends.