The 6th of January is a holiday in Italy to symbolise the baptism of Jesus. It is also a celebration to mark the visit of the 3 wise men to Jesus. 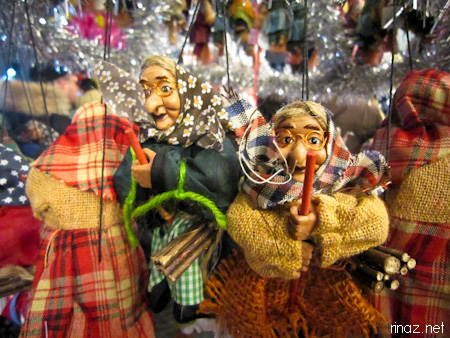 In Italy, there is the story of the befana, a housekeeper who looks like a witch because of her broom. She was invited to travel with the 3 wise men, and declined but she changed her mind at the last minute. But by then, it was too late, and she couldn’t find them and in the end decided to gift all the other children instead – candies for the good ones and coal for the naughty. Which are stuffed into stockings like these :

So if you’re in Italy at any time during this week, you’ll probably see a lot of these, or something similar, around.

Last night, Cart and I were at Piazza Navona to see the decorations as well as the carnival there. Usually there will be loads of things to see there – people selling the Befana toys, giant dougnuts and game kiosks.

Unfortunately, only half of the piazza was filled and it didn’t feel as festive as usual. Perhaps it was because of the very cold weather that we are experiencing currently, but whatever it was, it made me feel kind of sad because when I first arrived in Rome about 8 years ago, the Befana was a big deal, even more so than Christmas.

There was a parade near San Pietro this morning, which would have been interesting to see – with over a thousand costumed figures.

I had all the intention to see it, but then changed my mind when the temperature dropped down to 1 degree when I woke up this morning. Brr … too cold to go out on the scooter by myself.

So here is a compromise, someone else’s video of last year’s Viva La Befana!

Ok, no need to go to the one next year. I’ve already seen it 😛