Hello! I’m typing this while waiting for my dental appointment at the polyclinic!

Cart and I have been here in Singapore for about 4 days now and we’ve been enjoying our stay so far, seeing different places eating different foods.

We came here with Air China by the way. It was my first time with this airline. Normally, we would usually travel via Emirates because of their competitive pricing and also because of the larger seats. Unfortunately when we were comparing for the best price for economy seats 6 months before our flight for this year, it turned out to be Air China this time round.

Among the people that I knew, Air China did not have such a fantastic brand name. In fact, the first time when a friend learnt that Cart came over to Singapore via Air China, she laughed out loud and thought that he was joking!

On the evening that we left Rome, it was my father in law who fetched and  sent us to the Fiumicino airport. It was really cold when we were reaching there. 2 degrees! It was probably the coldest that I felt in Rome for a while. My father in law mentioned that snow was expected the next day and I was shivering badly underneath despite wearing my winter jacket. 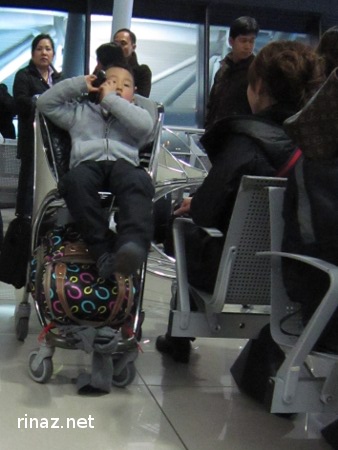 After checking in and going to our gate, there were already quite a number of Chinese people gathering around. There was also so many rosy-cheeked toddlers. One even wore a traditional chinese costume adding to their cuteness factor. He was so adorable.

In no time, we finally boarded the plane. It was an Airbus A330. The seats were a little smaller than the one in Emirates but thankfully, our row had two seats, followed by four in the middle and then two on the right. I had the window seat while Cart had the aisle and we could have our armrest lifted so it was a little more comfortable.

In each seat, there was an entertainment set for each traveller. The range of shows were limited though, and the programs did not start on demand. We had to wait till the show ends before it repeats to the beginning and the quality of the videos looked very VCD’ish. Nevertheless, I was laughing at My girlfriend is an agent, crying at the last scene from Shrek Forever After and falling asleep during Ironman 2. 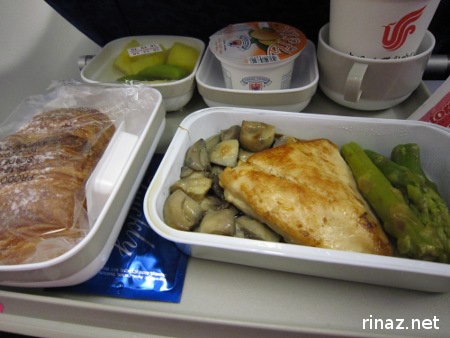 Despite the smaller seats, I thought that the plane was pretty decent. My one small qualm with Air China though, is that I really didn’t like the food.

9 hours later, we were at the Beijing Airport for a stopover. It was a nice, modern looking airport. I liked how clean and new everything looked. Cart and I were fawning over the fever-detection infrared machines that was at the gantries as we walked along. This was most probably installed since the SARS pandamic some years back.

I noticed that since practically everyone here prefers to speak in Mandarin, it could be a little tough for travelers to ask for help. It could also be the additional cultural factor that the people were rather curt here. But luckily I picked up a little bit of mandarin while in kindergarden, from channel 8 chinese drama serials, and stuff I always hear my Chinese schoolmates tend to say. But I am extremely rusty though. So I was able understand and speak a little, albeit very badly. 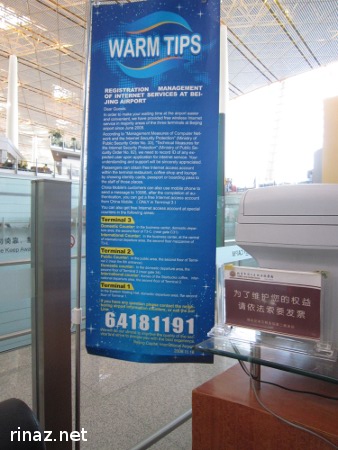 By the way there are free wifi at the Beijing Airport. You could ask for access from any shops. Cart and I didn’t realise that till we reached the business counter which was a challenge to find. We walked round and round and I almost gave up.

But Cart persisted and at length we found it! The girl at the counter, while she could not speak English, she was very kind and patient and helped set us up for internet and we were off!

Thanks to the great firewall of China, we couldn’t access plurk. Nor twitter. Nor facebook while at the Beijing Airport. But we discovered something interesting. Cart was able to get through to wikipedia in Italian but when the language was changed to English, it was blocked! 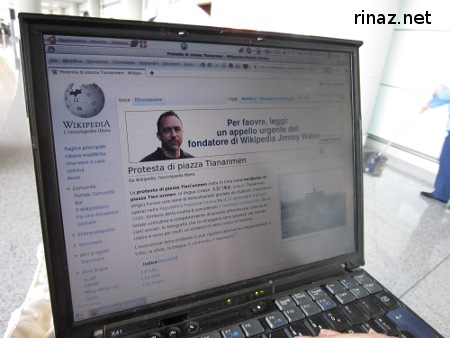 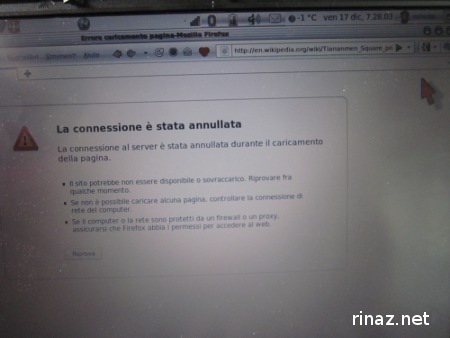 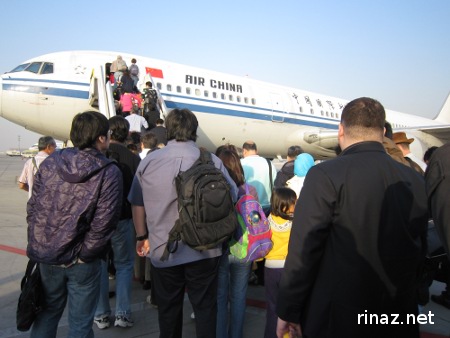 And at length, after 6 hours later, we reached Singapore! It was my entire family welcoming us at the Changi Airport. 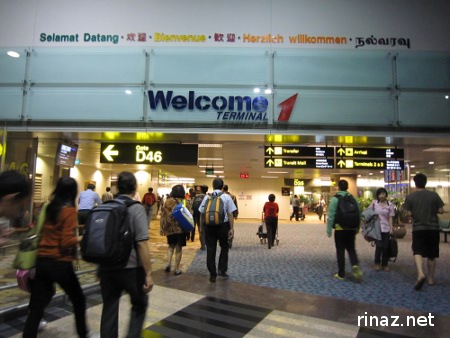 This month was said to be cooler for Singaporeans and Kaosd was commenting on how cold it was. Nevertheless, after just a couple of days, I am sunburnt now. Red patches all over my arms -_-

Sidenote : Oh and thank you for the welcome be it via Plurk or Facebook or Twitter. That’s really sweet! By the way, there is an open house going on on the first of January. There will be some Italian food and Nasi Lemak for those who doesnt like Italian food. Oh, if you could bring some Wii games, it would be lovely too :-p

7 Replies to “My flight with Air China”