I have a friend called Narima, who lives in Jurong, the same area as me. We could have met with the conveniences of a shopping center in Jurong, but noooo, we had to go all the way to Rome just to meet each other.

It was Sunday, and we were to meet each other at the Porta Portese fleamarket for a ‘just us’ get together, at around noon time. Cartcart dropped me off at one of the road junctions while I confidently walked down the road. “I’ve been here before”, I thought to myself. Finding Narima would be a piece of cake.

What I failed to remember was the sheer size of the place. There were rows and rows of makeshift vendor carts that the eye can see. I walked aimlessly and wondered where to head to in the sea of people, pushing against each other.

Narima started to sms me.

“I’m right here at this brown building with white ledges”

“I’m deep in the market”

“I dont know either!”

“Call me, Marina. I dont know how to make overseas call”

“My prepaid card doesnt allow me to do that”

After more sms being passes back and forth, Narima finally managed to call me.

“Which street are you at?”

“I’m at this street called the Renella Modena”

My prepaid card was completely used up. I tried to sms her. It still didnt work. There was absolutely no credits left in the card. I panicked. I couldnt call anyone for help. What am I going to do now?

I stood there at the corner of the street and just froze up in the warm noonday sun.

Fortunately for me, by a chance of miracle, about an hour later, I saw Narima and we were so relieved to see each other. We had a walk along the beautiful streets of Trastrevere and we talked quickly and animatedly about our experiences so far.

Narima told me that she arrived in Italy on Friday (I arrived Thursday) after being stuck in Doha for about a day, waiting for the transit flight. It was most tiring, she said. I asked her why she didnt book using direct airline like KLM or Airfrance. She answered that it was the ticket that the agent gave her and she couldnt change it.

Narima invited me back to her dorm just to chill out. I thought it would be great to see things on our own. So we took the Circo Massimo Metro to head to the Termini Station, where her dorm was. I still remember the biglietto that had to be purchased to be used for public transportation. 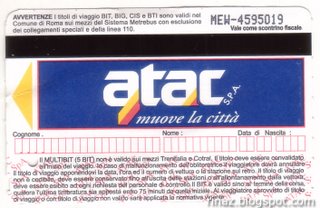 The ticket needed to travel on public transportation

There were alot of people in the metro. 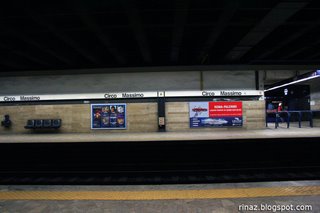 Scene of the metro

When we reached the Termini Station, I felt like a salmon when they need to swim against the waterflow. Everyone pushed me to go to the direction of the exit. And I had to comply. I couldnt see Narima anywhere! Maybe I’ll just wait at the exit and see if she’ll turn up.

There were three policemen at the exit for some reason, preventing people to go up the steps into the station.

Every time someone tries to go up, they will say in a loud voice, “No! No! Venga! Venga!”

After 30 minutes, Narima still didnt turned up and I panicked again. With no way to make calls, and no way to make sms, I really felt helpless. It really is frightening to be in such a huge place with no idea how to get around. I still wasnt very fluent with the language and thus making the situation even more difficult.

Fortunately for me, I saw a payphone that accepted coins (usually they accepted cards only) and I called up my dearest.

Him : What? Slow down, I cant understand what you are saying!

Me : I cant find Narima! Now I dont know where to go!

Him : Where are you right now?

Me : I’m at the Termini Station

Him : Wait for me at the Via Giolitti exit. I’ll pick you up.

So I headed up to the exit and saw the crowds coming and going. There were many different people, all speaking in a language that I was not familliar in. It was so surreal. And I wondered about Narima, where is she? Will she be alright?

Cartcart picked me up after a while and I felt so relieved to see a familliar face. I used his mobile to sms to Narima not to worry about me and that I’m heading back.

“Where were you? I waited for you!”

“It must be scary to be lost in a large foreign country like that!”

I was really touched by what Narima did and said. That was extremely sweet of her to stay while her companions left without her to head back to their hotel. I invited her for dinner with Cart and me. Thats the least I could do.

In the evening, we picked them up from the Metro station and headed to the L’antica Roma restaurant that we’ve been to (and I liked) last year. Narima was amazing. She made friends with a Japanese girl from her dorm a few hours before and invited her for dinner with us. 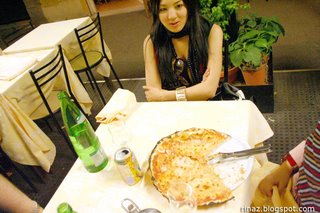 And we had a rather interesting time getting to know her.

Satako was her name and she lived in Tokyo. She’s amazing as she was only 19 and here she was travelling around the world (alone) with the money that she earned herself! Narima and I remarked at how brave she was. At 19, we were still both the goody type of person in school.

Me : Bah! Cant stand you! You’re doing all these and you are younger than me, taller than me, prettier than me …

Satoko ordered pasta, Narima ordered a pizza while Cart and I had the Gnocchi each.

Me : The pizza is going to be quite large, Narima

In time, the food arrived and as expected, the single portion pizza was rather huge. Narima was very surprised at this. Back in Singapore, this type of size would be for 2 – 3 people.

Anyway, we had a lot of fun joking and talking over dinner.

Narima : Wow! All these Italians are so noisy over dinner!

(We both speak animatedly in Malay)

Narima : You know what? We can even curse in our language and they wont understand a word!

It was just too funny.

Anyway, got to go off soon. Meeting Cart’s family in a few minutes. I wonder how it will turn out.

P.s European keyboards are so wierd. It takes ages for me to find the symbols that I want to use.