Artichoke is a seasonal food best eaten during Spring, but I clean forgot that I had these pictures in the SD card after the drama with my camera. But as a side-note, there is an annual artichoke festival that I think would be an interesting event to go to, if you have the chance to visit Italy in April.

One of the things that you could do with Carciofi Romanesco is to make Carciofi alla Romana – Roman styled Artichokes. 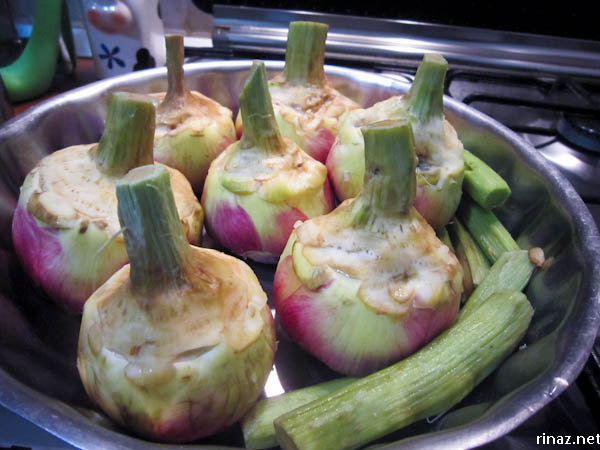 Cut a lemon into two and rub it on each exposed part of the artichoke while cleaning it to prevent oxidization.

And you clean the artichokes by peeling away the woody, outer part of the stalk and a few layer of the petals. Not forgetting to carve away any thorny bits inside.

Next peel and slice the garlic cloves. There should be enough to go round for each artichoke to have half a clove.

Mentuccia is a member of the mint family, but it has a stronger, more distinct scent and is used in many Italian dishes. Chop some. But if they are not readily available where you are, you could use regular mint.

Stuff each artichoke with the chopped mentuccia, the sliced garlic clove and some salt.

In a pot that is snug enough to allow the artichokes stand, put some extra virgin olive oil, and carefully place them facing down.

Then leave them to fry till the colour turns more amber-ish.

At this point, add some water, put a lid on the pot and let it simmer for about an hour.

You cut the artichoke into two. It is easily sliced, but still firm. The taste is distinctly rich and rustic due to the mentuccia and yet delicately creamy due to the artichoke. It’s delicious and absolutely hearty.

It’s interesting at how so few ingredients can make such a satisfying dish.