After we’ve booked for our Air Asia flight, it comes the other task of searching for lodgings. As always, I prefer staying in bed and breakfasts or homestays over hotels as they are generally cheaper and could accommodate more people comfortably. 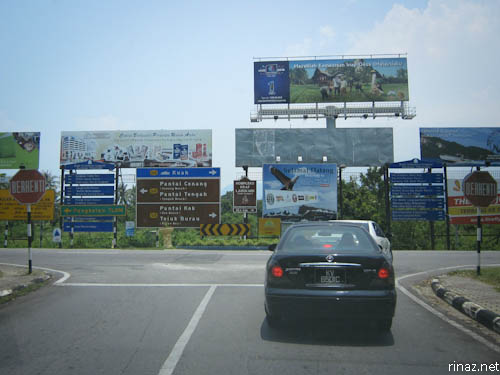 And thus, I did some research online and stumbled upon Eylizar Homestays  (the website is in Malay though) and poured over the different lodgings. I was finally intrigued in a serviced apartment called, Century Suria and wrote in an inquiry. They replied quite speedily and we got a quote for 250RM + 100RM a night for lodgings and a 7 seater car, which seems reasonable.

It was a bit of a challenge to make booking payment however, as for the moment, they were only able to do inter-banking payments and none of us had a Malaysian bank account.

We managed to solve this issue by using Western Union in the end, to transfer the money to their bank using a Swift Code.

It was a sunny day when we reached Langkawi and of course, I was very excited to be there, raring to explore this beautiful island. We were welcomed at the arrival hall, and the first thing that we did was to get a SIM card for our phones.

My brother Nazry and Cartcart got a Hotlink prepaid card each. It was pretty easy to get one by the way – just show your passport and they’ll handle the rest. I’m not too sure if it’s worth getting though, because the signal connection here seem very erratic. Although I have to admit that getting one would be useful just for having GPS to guide us on the roads.

After that we followed our usher to our rented car and , which is a Toyota Avanza. After checking Cart’s international license and the handing of our receipts and whatnots, we were off to drive to our lodgings.

Cart had to take a while to get adjusted to the gear by the way, as it was automatic while we’ve been driving manual cars all these while. But it was not a big deal, I think it would be more challenging for an automatic driver to get used to a manual! But I think the biggest thing that we had to get used to, was to get used to driving on the left side of the road. It’s the opposite for Europe. 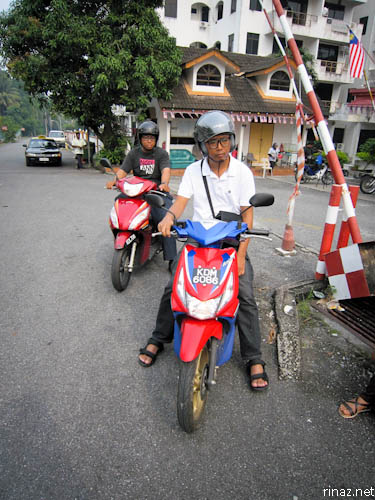 By the way, you could also rent motorcycles there. My brothers got for themselves a 125cc scooters each for 40RM a day. I think it’s a great way to explore the island.

Oh! And before I forget, check out the prices for fuel in Malaysia : 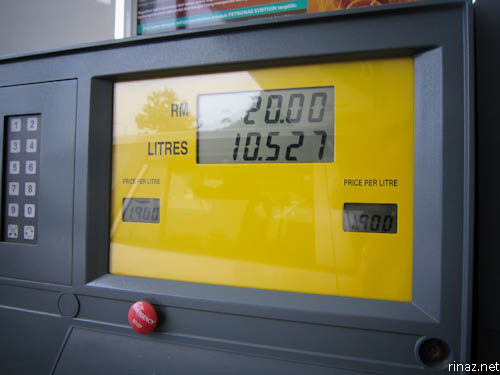 Nice! I like that the Malaysian government gives subsidies for fuel, which is unheard of for in Italy and in Singapore. I guess the price has raised a little at this point of time, but you could never get 10 litres of fuel for 5 euro in Italy …

In any case, Apartment Century Suria is located in an area called Kuah, which is a good 20 minutes drive from the airport. Nevertheless, when we reached there, I thought that it looked quite pretty.

I liked seeing the high rise building and with the pool outside, it looked quite classy and modern and gave me a condominium feel. There was also a little corner shop where you could get snacks, which I appreciated a lot. We hanged out there for a bit, while waiting for the owner of the apartment to bring us to our lodging.

It was only when we reached our apartment which made me a little disappointed. I asked Mr Lai, the man who was taking us to our apartment (Translated from Malay)

Me : Which level are we staying at?

Me : Can we please have a higher level?

Him : Sorry, this is the only one available

That’s fine. We just have to bear with a lack of view. But the closer we reached our apartment, the most disappointed I got. The path leading towards the front door had broken tiles on it, and the apartment had this strange musty smell, as if no one’s lived there for a while. 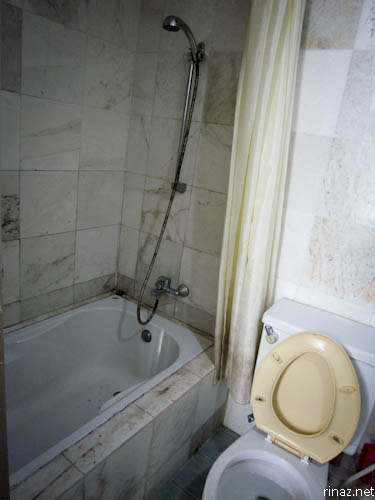 There were missing remote controls and holes in the ironing board … Suffice to say, the place was just not complete.  but what bugs me the most was that the floors were very dusty. Which was unacceptable to me, because we did booking in advance, which means that the place should be taken cared of at least a day in advance, right?

I’m not that fussy when it comes to lodgings, but cleanliness is very important to me.

Which is such a shame because I think that the apartment had such a great potential and would be so classy and be more inviting, if only the management did just a bit more maintenance on the place.

So I did read from tripadvisor but I didn’t really believe the bad ratings till I saw it for myself.

In the end, we called up Eylizar to give them our feedback and they were very apologetic about the whole situation, saying that they were not aware that the apartment management has changed owners and we were supposed to get the 5th level (with complete facilities as reflected on the website)

The next morning, we got to change to another apartment in another location in Kuah called the Sri Lagenda Apartments. 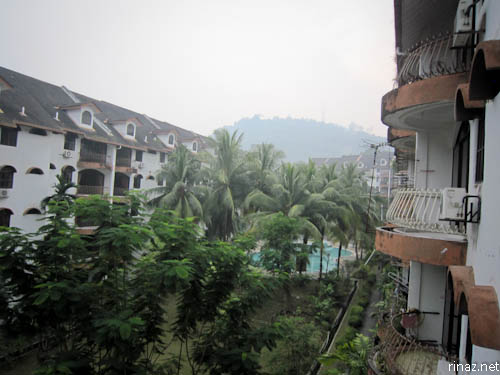 It was actually a blessing in the end as I liked the location better. While we didn’t have the view of the sea being on the 4th floor nor an elevator, there were a lot of facilities around us as we were in the heart of the town of Kuah – it was easy to get to the market, the shops and the likes.

I was starting to have sore throat (probably from my 15k run a couple of days before) but there was a pharmacy just a short distance away from the apartment. Oh! And I had the most awesome food in this area! And I’ll blog about it soon 😀 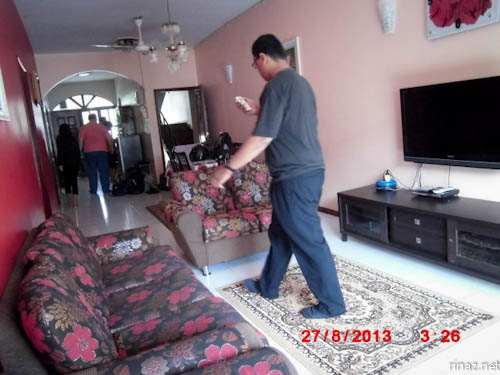 Our apartment was really cosy by the way. It was like being in someone’s house, so you know things were taken cared of. Everything was complete there – there was a functional kitchen, complete with basic needs like a water heater, rice cooker as well as condiments, which I appreciated)

(But even if there wasn’t, I know my parents enjoy going marketing in Malaysia and get more than enough stuff to fill the fridge up anyway!) 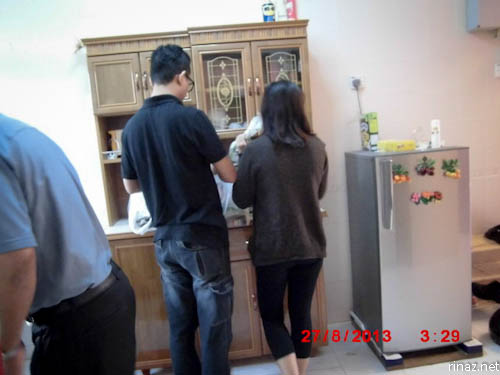 There was even a washing machine there where we could do our laundry. Cart and I travel light, so it was a big advantage to reuse the clothes that we have and wear clean outfits on a daily basis.

(Freshly laundered clothes takes a short time to dry anyway, due to the hot climate)

In the living room, the sofa was really comfortable to sprawl on as we watched their flat screen TV. There was supposed to be Astro, a Malaysian cable but we had no idea how to use it, so we managed to  watch the accompanying DVDs instead.

I tell you, it was so comfortable just lying there that I dozed off while my siblings and I were all watching Fast and Furious 6.

And something very important to Cartcart … there was air conditioning in the living room as well as all our rooms!

I love how pretty the entire apartment is furnished, with little touches of roses here and there. Our beds were comfortable to sleep on and probably an odd thing to notice, but I liked the bedsheets and there was a towel ready for each of us.

(Speaking of which, the pictures below are taken on the last day, so it’s not pristine … ehm) 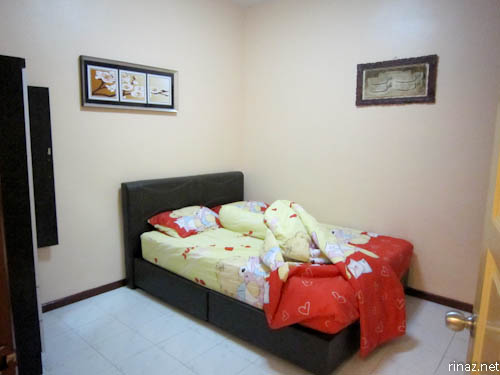 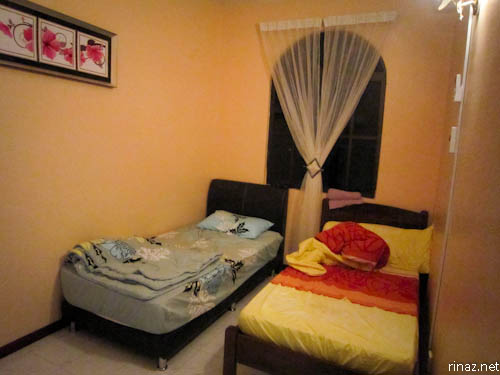 But most importantly though, is that the place was clean.

One small critique though, is that the bathroom should have a completely closed window to prevent the mosquitoes from coming in.  In a humid tropical climate, there is always a risk of getting bitten by mosquitoes. All in all, I enjoyed our accommodations. It was really like home away from home to me, especially during the mornings when I saw kids in school uniform running off (presumably to school) and it brings happy memories to me, thinking of when I had to do the same too, once upon a time.

4 Replies to “Where we stayed at in Langkawi”