Initially I thought that I’d do a sort of April fool joke. You know, like rinaz.net being acquired by another company and I’m being paid loads of money for the domain. But there are a lot of smart people out there, moreover, this domain is such a part of me, it’s so I change my mind.

If you believed that I would … April fool! I guess 😛

Nevertheless, it’ll be nice to have some extra money. Ah 46K. The things I would do with 46 thousand drool-ars. First thing I’d do is to get a new scooter to replace stupid Sam.

Anyway, yesterday was Easter and it’s a big holiday in Italy. We’d normally spend the day at Cart’s parents and joined with my sister in law and her kids, we’d eat and eat and eat.

And here are what we ate :

This is a crepe with tomato sauce and parmigiano. 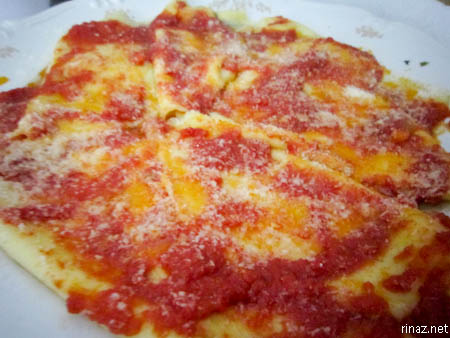 Cappeletti in chicken broth. The dumplings are stuffed with meat though, so I didn’t eat that.

Nor did I eat this meat roll. Looks good though.

And instead, I had baked fish! Nom nom! The name of this fish is called dentice and I keep imagining that it had big teeth.

And here is the pastry that Cart made the evening beforehand. It is called Torta pasqualina and Cart was inspired to make it because of it’s namesake. It was interesting to me, because of the eggs inside. Initially looking at the recipe, I thought that boiled eggs were used. But it’s not.

Here is how it looks like before it’s covered with pastry and cooked. Cart made little holes in the ricotta cheese and bieta mix, for the eggs to rest in.

And this is how it looks like when it’s done and cut open! Yum!

After our lunch, it was time to open our chocolates with the little surprises inside. Everyone got a chocolate egg.

Here is a quick video on how to open them!

By the way, it seems that PowerDirector is starting to be bonkers for me. My last two videos are squashed, and I don’t think it’s coincidental anymore.

As for me, I prefer not to break them though. I donno. It seems like such a shame to break open such a beautifully packed chocolate egg and bunnies. I’d be like murdering it! So I’ll just pose with it (since no one is taking pictures of me) and eat it … in December. 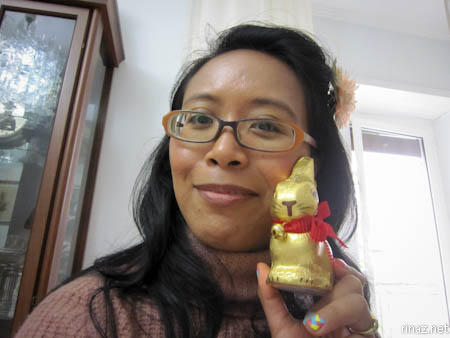 After that, I was so stuffed that the only thing I wanted to do was to stone out on the couch and watch Tomb Raider. My goodness. Technology has advanced so much since the first Tomb Raider came out in 1997. Lara was blocky and so pixellated.

But I spent hours playing that game. I had lots of fun and it was exciting. Now Tomb Raider looks so realistic. It’s like watching a movie and looks so lush and realistic, I don’t know if I have the guts to play it for real. (This one is rated M by the way)

Anyway, the funny thing about having such a big meal, rather than feeling full, I feel HUNGRIER some hours later and now my itchy mouth wants to eat more.

2 Replies to “Important update : rinaz.net has been acquired”