Growing up, I’ve always been skinny. Family members would always call me a crane, bamboo stick … Because when I was in school, I could never gain more than 50kg.  That’s really thin for someone who’s 1.61m.

It was only after I’ve started working when I started to gain weight. What with my new-found money, I suddenly could go and eat all the food that I’ve always craved. Mcdougals. Burger queen. Especially Long John Silvers. I loved them all. Picture by Dainty Chef. Not the same thing, but close enough!

Anyway, coupled with stress and boredom (two very bad combination) the weight just kept going up. They say that falling in love makes you gain weight too. And after moving to Rome, my weight ballooned up to 63 kg. But it still kept going up. Till about a year ago, quite number of people kept commenting that I’ve gained weight noticeably.

I paid no attention to them because, well, I tended to filter out hurtful comments and was in a sort of denial. Even when my trousers were getting tight, I kept thinking to myself .. “Gosh, did they shrink in the washing machine?”

I was pretty much like that till when this picture was taken : 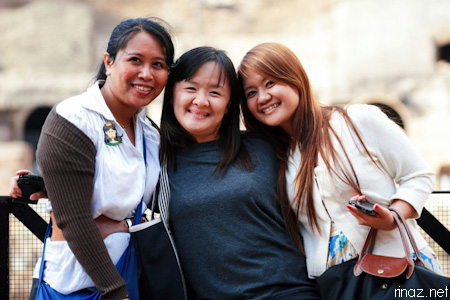 This was when Daphne, Serene and Nick stayed over with us on their European vacation. I looked so FAT and so puffed up in this picture. What happened? And I can’t blame this on bad angles or a bad picture. Because there were loads of pictures like that.

I couldn’t deny the numbers on the weighing machine. I was almost reaching 68 kg. And seeing that number, and the picture was what shook me up and made me decide to change.

But one thing about me is that I’ve never believed in diets or pills and quick fixes. I won’t take them because I don’t want to get the yoyo effect, or that I’d gain all the weight back when I stop taking the pills.

First step was to go for regular jogs. I was inspired by my friend Claire, who started to go jogging and was already losing quite a bit of weight since then. It was an inspiration to me. But I didn’t want to disappoint myself, so I never went jogging for the intention of losing weight but for health and feeling better.

First I started with 2 km runs. And then upped it up eventually to 5km. And I did lose weight. Very very slowly. Up to a point that it seemed that I didn’t lose any weight and thought that I hit a plateau.

It was only after the fasting month when my weight went down quite significantly. I know that it was probably not healthy, but I was determined not gain them all back. 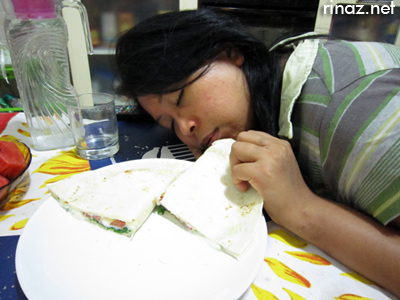 Too sleepy to eat

By this time, my eating habits has changed quite drastically, because after a month of fasting, my appetite and cravings went down, so I continued to have small meals. And at the same time, I continued jogging and eventually I found out that I could jog for 10 km non stop.

Woah! Such an achievement for me! I never thought that I could do long distance. Makes me motivated to aim for a half marathon! (But maybe in 2013. Baby steps)

To my glee, after months of monitoring, instead of the weight going back to before, it just went down. It was just so cool. And at the beginning of this year (after the crazy Xmas and New Year’s feast) I’ve gone down to my optimal BMI (according to wii-fit) 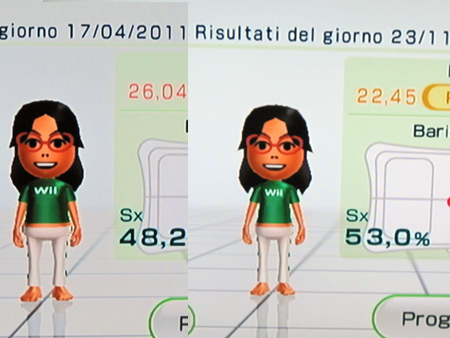 And now that a year has passed since that picture was taken, I’ve lost more than 10 kg. That just boggles me. That I’ve been carrying 10kg extra all these while. Carrying regular amount of groceries is already so tiring. How did I carry 10kg?

At this point of time, I’m hovering between 55 and 56kg. And it seems to be staying that way, even when I’m not jogging regularly at the moment.

Truth be told, I don’t feel any different. But Cart tells me that my stamina has increased and I complain less when we go around walking. And as the seasons turn and I change from my winter clothes to my old spring-summer clothes, they turned out to be annoyingly big. Some of them are rather new! I feel no satisfaction of diminishing returns!

Some of my trousers could just be pulled straight off my butt if I don’t wear a belt with it. Even that sexeh jeans I have up there is starting to be loose. And my beautiful bras! I can’t wear them as I’m not a 36C cup any-more.

But despite all that, I think I look better now. And I can’t get over the fact that I’m about the same weight as when I was in my mid 20s.  But I hope I don’t lose any more. Any more, and I think I’d be too skinny!

And to end this post, this is a nice picture of me :

And a side by side : 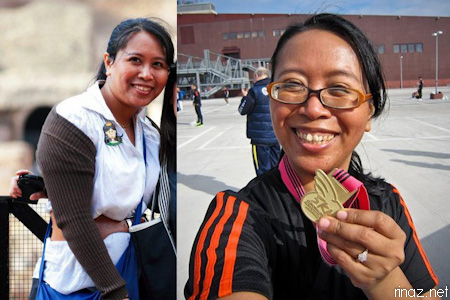