At first glance, Circo Massimo might not be of any interest to any foreigners visiting the area. While its true that first thing that you would see is mainly a large and uneventful patch of land but I think that there is more that meets the eye.

Large plot of land where there used to be horse races

The first time I was here was with my friend Narima. We were walking towards the Circo Massimo subway when I noticed an area full of roses. I was intruiged. However, as Narima and her friends were in a hurry to return back to their dorms, I did not get a chance to admire the flowers.

Now that it’s spring, and flowers were appearing, I thought that it would be a good idea to visit the area again. Thus, last weekend, Cart and I headed to Circo Massimo. 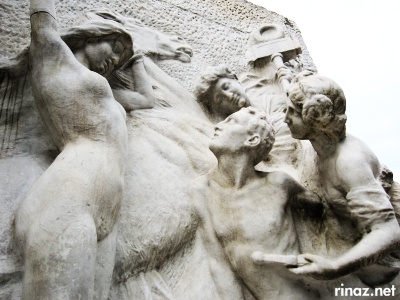 It was a lovely and cool day in Rome. Circo Massimo felt peaceful and tranquil. Cart and I were fooling around the statues when we noticed a large group of priests and nuns. And then we walked towards the gardens. 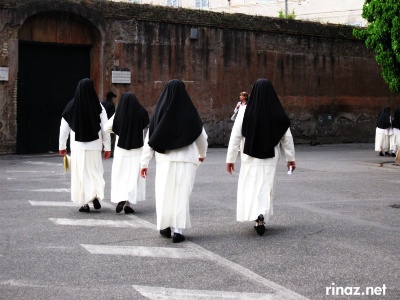 The entire area was full of beautiful roses of a multitude of colours. It was breathtaking to see. 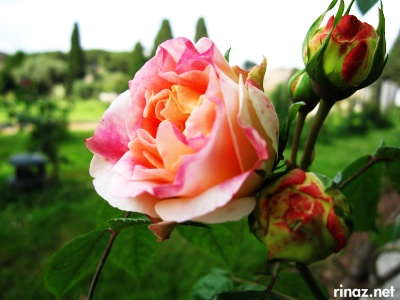 There were already a number of people were there, admiring the roses. Unfortunately for all of us, the gates were locked and we were not able to enter the gardens. We could only peer at the roses through the gates. It was only with closer examination that the gardens only be open on the 10th May.

Not wanting to leave so soon, Cart suggested to explore the area a little more. Initially, I was a little doubtful. What could possibly be anything interesting besides this? But I was game enough to explore and together, we walked towards an almost hidden small road beside the gardens where we found a very charming area.

We had a very tranquil and relaxing walk past regal looking buildings and I noticed a couple of people wearing formal clothes. There must be a wedding going on.

And finally I noticed the bride and groom. How romantic 🙂 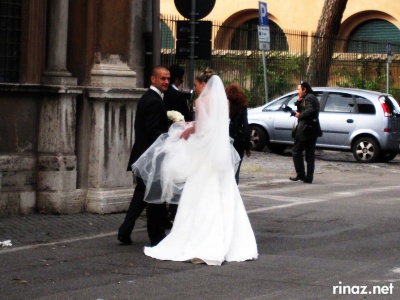 As much as I wanted to gatecrash the wedding, Cart was feeling self conscious in his very casual clothes. Hence we continued walking where were saw something very curious.

What’s this? A queue? What could possibly be so interesting in the keyhole? 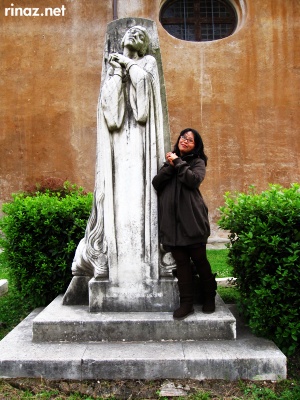 Poor Joan of Arc, she rescued France and yet got burned at the stake

After queuing up, I found out that inside the keyhole, was a long row of trees and in the foreground was the dome of San Pietro.

Too bad that it wasn’t picked up by my Ixus but It was still pretty cool to peek in anyways. This lady managed to take a better picture 🙂

We then entered the Santa Sabina Church nearby. What was interesting to me about it was that there were decorations on the floor. Cart tells me that they were tombs for the priests and we were careful not to step on top of it.

The inside of the church was large, with huge pillars and lights streaming in. It feels somewhat like Saint Peter.

Right at the far end of the church, I saw a small locked gate which lead down.

We then headed to Aventine Hill right next to the church where there were a bountiful of trees with bright oranges.

It was such a lovely day, almost like a Magritte painting.

There were people strolling along and when we reached one end, you could see Saint Peter and the Vittorio Emanuele monument in the distance. 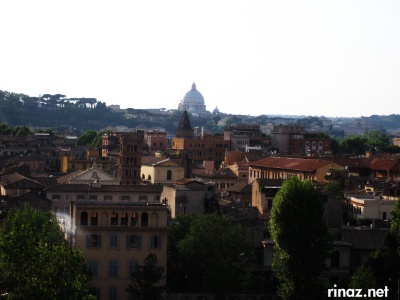 In the background is the dome of Saint Peter

This dude is pointing to Vittorio Emanuele monument

And that pretty much concludes our exploration.

Probably seems very mundane, but it was such a lovely lovely day and we enjoyed ourselves. It was just something that you have to experience for yourself. Circo Massimo is an interesting place to explore, regardless of what some people might think.

Moreover I found a Porsche! Lets just pose and pretend that it was mine!

12 Replies to “A day in Circo Massimo”