When I was a very young girl, while the old Geylang Serai was around, my dad would always buy a packet of steamed turtle eggs. For me, it was something very interesting to see. The seller would open a case and I could peer in something that looked like ping pong balls with sliced pandan leaves scattered around it. 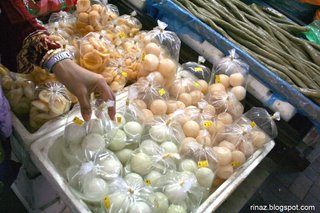 But unlike ping pong balls, the shell was soft and it tore off easily. Inside was a perfectly round yolk surrounded by viscous transparent liquid. Unlike chicken egg, turtle eggs was a new experience for me. It was acidic and it smelled rather caustic.

I didn’t fancied it. But apparently, it was a delicacy as I noticed plentiful of sellers selling them.

However, some years later, I did not see them being sold anymore. I suppose that with turtles being a protected species, there would be a law being implemented to against the trading of eggs.

Not that I would be missing them though.

Balut is another one

And as I watch television, youtube and in casual talks with friends, I discover that there are plentiful of food that makes me cringe.

But there is nothing like what Cart described to me.

Casu Marzu, a Sardinian delicacy. Pecorino cheese with maggots inside, eating and excreting the cheese to give it the soft texture.

What makes it more cringeworthy is that the maggots tend to jump when disturbed, potentially hitting the diner’s eyes.

Get the latest Flash Player to see this player.

What is the most wierdest, grossest food that you’ve ever had?

9 Replies to “What is the strangest food that you’ve ever eaten?”