Somewhile back in August, there was a contest whereby readers give their thoughts about the touchsmart and the judges pick comments based on their creativity. The judges were impressed by Jurlique‘s entry in my HP post. And that made the both of us to win a HP Touchsmart each!

It was so unreal that it took us some time to the information to sink in. I really thought that Claudia was pulling my leg when she sms’ed me her congratulations. 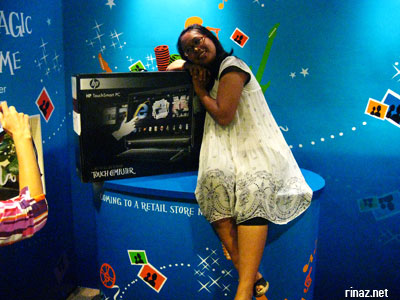 But in the end, we finally saw the official email. Jurlique and I were both grinning from ear to ear when we finally hand the touchsmart in our hands.

And very recently, I was at the Samsung Innov8 event and participated in their photo taking contest whereby contestants were to take pictures with the theme of what inspires me about the phone.

Thus, I was walking around with Wishbone and I asked for her help as I re-enact some scenarios. In my mind, I already knew what type of shots I wanted to get.

Even though I was not confident of winning anything, I thought I’d give it my best shot anyways. I even told Wishbone, “If I win (which I know I wouldn’t) I’ll split this phone into two with you.”

There were heaps of picture display which I took time to admire. In particular, I like Leonard’s picture of him with one eye shut with a silly grin – as the Innov8 had the smile shot and anti-blink function.

After we’ve done our presentation, we waited with in anticipation at the results and turns out that I was one of the winners for the Samsung Innov8!

I was most excited, surprised and happy that my hair started to magically curl.

Looks like I have to split the phone into two now 😛

But before I split it into two, I’ll post a review about it. I’ve been using it for about a week now and so far I’m liking it a lot.

Sidenote : Actually, there isn’t really a point to this blogpost. I just wanted to share the good news. Feel free to come over and play with my new toys 🙂