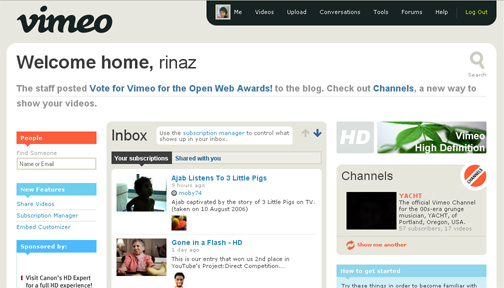 When I started using youtube in late 2005, I thought that that was the bomb. Having used to have to download large video files and had to wait a long time to download the clips we wanted, youtube was rather revolutionary.

Thus the start of this year, when I got my 2GB SD card and my logitech webcam, I started to be an avid videoblogger. I’ve been pretty much satisfied wth youtube. So far I have over 60 video clips in there, which is not bad 🙂

So when Moby mentioned that he liked vimeo so much that he was going to abandon his youtube account, I just had to sign up just to see what it was like for myself. The first time I went there, the website was bonkers, I had problem uploading videos, couldnt edit my profile, and when I uploaded a video, I couldn’t view them!

I found out later that the site was undergoing some bugs and was relatively stable and decided to give them a try again.

Vimeo even tells you how long it will take to convert your video : 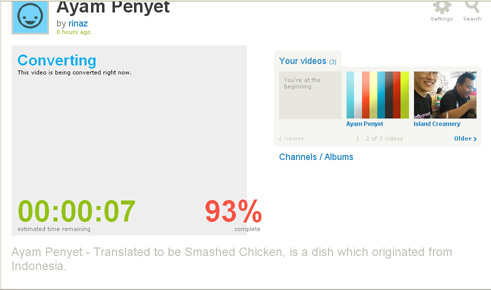 But what really blew my mind was the quality of the video that was converted. Take a look at Malique who is eating his ice cream here in youtube: 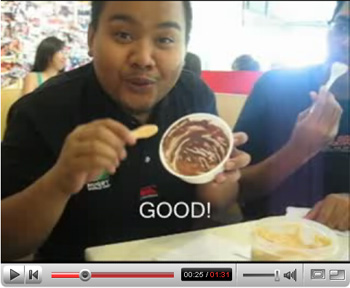 Its pretty not bad right? But take a look at Malique in the same still in Vimeo

My gosh, its much sharper and clearer that I was just stunned. For a streaming video site, this is very impressive.

One of the things that I like about Vimeo is that unlike other sites, it has a forum that allows you to ask questions from the staff or the community directly. Vimeo doesn’t seem to be as active as youtube, judging from the amount of comments in the forum – which could be a good thing, as I had countless of juvenile comments from youtube.

One thing that I dont fancy about Vimeo though, is the length of time to take to upload it. Typically, a video of about 50 mb would take about 45 mins to an hour to be uploaded and ready to be viewed. But at the same time, it could be due to Starhub’s uploading speed (which is a huge pet peeve for Singaporean videobloggers like me)

Currently, Vimeo also has a weekly 500 mb limit which is relatively unheard of in a video sharing website. But on the flipside, it makes people think twice on uploading the videos that is really important to them.

Moreoever with the advanced settings, I could replace a video, without having to delete the erring video and start all over again. This feature, I really like. I can also pick from a generous 12 thumbnails from the movie stills so that I could prevent embarassing opening pictures like this : 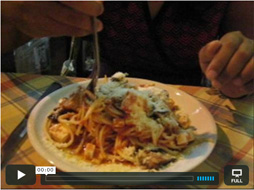 Also, Vimeo has no embedded logos or ads on their clips, which I find very refreshing. Next year, Youtube is starting a 10 sec advertisment prior to the video, which I find very intrusive. I can’t wait to port all my videos in Vimeo, which coincidentally, you could download the original video format too!

I cant right now for the moment because I’ve used up all my 500 mb. Now I have to wait a while for the upload limit to be refreshed.

Random sidenote : I really would like an Imac and a Canon Ixus 860, solely to make more videoblogs. But it’s so expensive.