When I first subscribed to the internet in 1996, we recorded our thoughts with newsgroups. We used outlook express to search and subscribe for threads and to discuss with other people.

Later on, we learnt HTML to code for webpages like geocities and tripod (which was commonly used at the time). We used guestbooks or forums to communicate with others.

These online logs was refined to what we know as blogs, with one of the first sites to offer them being blog city and blogger. Archiving thoughts has become much easier. It not even mandatory to know HTML – just insert content and hit publish to update.

Now, blogs are evolving to include a more variety of media, such as podcasts, video blogs and even sketchcasts. These has been made easier, as compared to several years ago with the technology that we have now.

This is where the microblog comes in. Microblogs are where you could record short burst of thoughts. The two microblogs that I use currently are tumblr and twitter. I found out about these services quite by chance and I started an account just for experimental purposes and I am surprised at how much I enjoy using them both.

Both of them function differently

Twitter is a convenient way to keep up with friends to see what they were doing in real time. And because one could set it to their mobile, one could send and receive messages as they were sent. Organizing events becomes so much easier when you can twitter it once, as compared to calling up a person one by one. Although tech guru, Kathy Sierra, does have a point in the dangers of twitter, its still a convenient tool nevertheless. 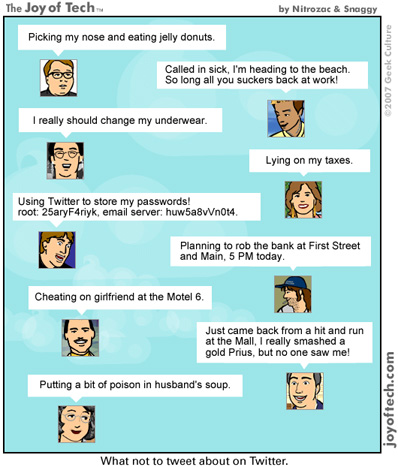 Twitter has been gaining popularity that even the TV show, CSI, has featured twitter in its series. Twitter has a lot of potential for mysteries. A while back, a victim’s murderer was found through his blog. I can imagine something similar for twitter.

For all the new functions, I still kind of miss the days when twitter used lolcats as an icon.

Tumbler on the other hand, can be compared to as a mini blog. It doesn’t send short messages to your friends, however, you could post short thoughts and other mediums that twitter cant do. Because Tumblr is not as serious as a regular blog, I feel that I have the freedom to post up any stream of consciousness I have, without the need to journalize it as I would do in my regular blog posts.

My tumblr page might not be impressive or even useful to anyone who stumble upon it, but I think that its a wonderful outlet of self expression. Especially now with the improvements done to tumblr, such as the search function as well as the pictorial archive, it is easier for me to look back and remember past experiences.

But as much as I like tumblr and twitter, I don’t think that it will be a replacement to blogs, but a convenient complement.

15 Replies to “Microblogs – An evolution of weblogs”