Many of us would recognize this picture as a tortilla bread, ready to be topped with fillings and then rolled up.

Imagine my surprise when I found out that if you ordered a tortilla in Spain, you would get this egg dish instead. 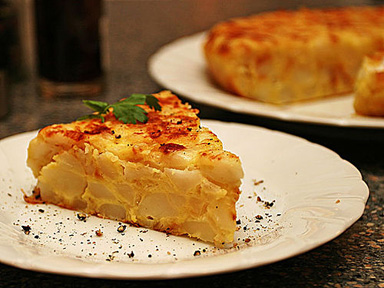 This was one of the many interesting facts that we learnt about Spain.

Having subscribed to the lifeskills and lifestyle @ People’s Association newsletter, I saw a contest about a Latin American Culture Workshop and participated for the fun of it. I’ve forgotten all about it till I checked my email some weeks after and realised that I’ve won. I decided to take my mum along.

We reached Tanjong Pagar Community Center and we were introduced to a Antonio Codinach, a director and teacher for the Las Lilas Spanish & Portuguese Language and Cultural School.

As soon as Antonio started talking, I was immediately fascinated by his accent. I must be having the same fascination as how my family was when they met Cartcart for the first time.

Antonio started with an overview of the different regions of Spain and then talked about the interesting facts about it like :

There were a number of people our group who have previously travelled to Spain and shared their experiences there. Mum chatted up to the lady sitting near her and she affirmed that Spain was indeed extremely beautiful but it could tend to be messy.

Antonio moved on towards the gastronomia popular spanish foods, such as the Paella, theTortilla and the Gazpacho. I have to admit that although I was fasting, my faith almost wavered while looking at the most appetizing sights!

Seeing how the food was prepared made me realise how similar Spanish food was with some of the food that I have encountered. The Arroz con Leche (rice with milk) for example, reminded me of an Indian dessert as well as a Malay Bubur Pulut hitam (Black Glutinous Rice pudding).

I could also see how the Tortilla definitely reminded me of the Italian frittata as both uses eggs as the main ingredient, fried and turned over. Many Spanish foods use olive oil, as Italian foods do too. 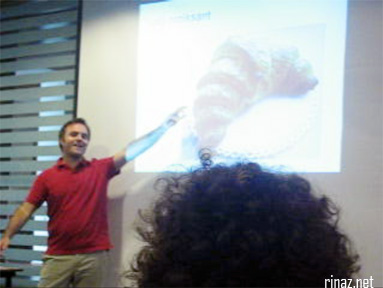 Later on towards the end of the workshop, we learnt some basic Spanish words.

It was interesting to note that the Spanish ‘ll’ sounds like an english y. So when we say me llamo, it is pronouced as ‘meh yammo’. As the Spanish language has its roots from Latin, I immediately picked the similarities to Italian, the language that I am currently learning like the genderisation of words and how similar certain words are to each other. For example, an egg is uovo in Italian, and huevo in Spanish.

Without us realising it, workshop came to an end. Mum and I thoroughly enjoyed the enriching session that we had about the food, the culture and the language. To be honest, before this, it never crossed my mind about visiting Spain. I wonder if we will be going to beautiful Espanol in the future.

Here is a clip from the workshop :

11 Replies to “A cultural and language workshop on beautiful Spain”