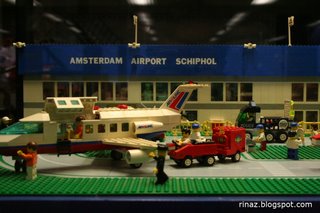 Back in Singapore again after a 14 hour flight ordeal.

Missing him a lot. Where did the time go? It feels like the days just passed by in a blink of an eye. A wonderful week with my dearest and now I’m back here again. It’s quite heart aching actually, sometimes. 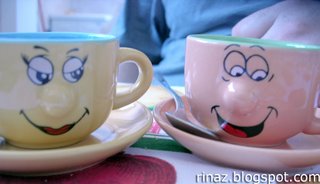 I spent a most lazy vacation, doing nothing but lounging around the house doing housework and meals, and the occasional dinner and passeggiata. I was even too lazy to take much pictures. Not complaining though, getting a break from work and studies was a total breather.

And the meet with Cartcart’s parents? I think it went fine.

They invited us for dinner on wednesday. Throughout the day, I asked Cartcart, “Do we bring gifts? How do I greet them? What are the correct things that I should do?”

I spent a while thinking of what to wear before finally deciding to stick to the feminine and demure pink knit top and skirt that I was already wearing.

By the time I was done blogging, we were in a rush already! We were supposed to be there at 7.30 pm and we only left home at 7p m. Cart told me that it was considered rude to turn up exactly on time as it was perceived that the guest was only interested in eating.

I didn’t know that! Ack!

At length, we finally reached the place. Cartcart quipped, Relax! Sometimes I’m always late anyway, We take it for granted since we are family 😛

He pressed the buzzer, the gate opened and I stepped in and a rather large apartment. There were a few people already at the door saying hello.

Cartcart introduced me to his sister, Paola, her assistant, and finally his mom and dad. I shook hands with them and smiled but I was rather flustered as I couldn’t speak the language so well. It was way over what I could handle.

Cart’s dad invited us down to the garden for an aperitif while he talked about the fruit trees that he had taken cared of. Paola’s children came down to play and I was amazed at how extremely cheerful the family was. Everyone was smiling and clapping and saying words of encouragement to the children even at the smallest accomplishment. It looked very very loving. 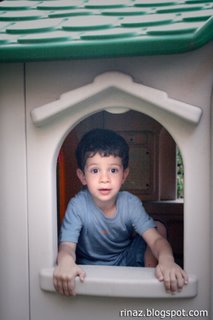 It was quite different to the more reserved Asian household that I was used to.

In time, we had dinner and I looked and marveled to myself that I’m actually having authentic home cooked Italian pasta. Paola made tomato based pasta with olives, capers and a large prawn. It looked more like a small crayfish actually.

After which we were served with a large plate with at least 6 different cheeses. By then, I was already rather full as Italian portions are rather large. But I wanted to try the cheeses anyway. The sweet Cartcart carved some for me and I tried a few. There was one in particular cheese which I was fond of – the delicate sweet milk cream cheese which tasted very refreshing with honey. 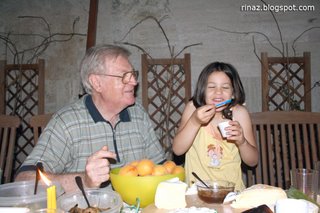 Paola’s daughter was gregarious but appeared shy when she was near me. Cartcart explained that she was fascinated by Sandokan, a popular Italian TV series about a Malay pirate. And me being a Malay, she was expecting me to arrive with a kris and give a fighting display. Which was quite funny as I’ve never heard about this ‘Sandokan‘ before being explained about it. 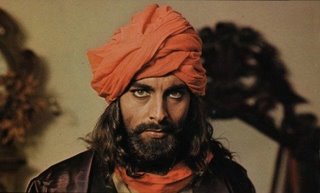 Cart’s mom and dad had a chat with me over dessert while the children were sent to bed. It was already approaching 9.30 pm. Interestingly, it was still bright at 8.30 pm.They asked questions about Singapore, the nice sights to see around here, how the country made their money, and the different types of people here.

I looked at Cart’s parent’s features and I can even see how he got his eyes from his mum and his nose from his dad. “He’s got my stubborness too!”, quipped Cart’s dad.

A while later, we thanked them for a wonderful dinner and said our goodbyes. It was the norm to make kissing sounds as you put your cheek left and right, close to theirs.

As I waved from out the window, I asked Cartcart.

Cartcart : Well, I think that it went fine. If I dare say, I’m sure they think that you’re cute!

The night seemed rather early. Cartcart decided to take me out to Piazza Navona. It was a lovely night as we walked down the cobblestones as I recognized the place were we visited last year. Though it was night time, there were still a throngful of people walking about and we stopped for a while to listen to a group of people singing acapella. 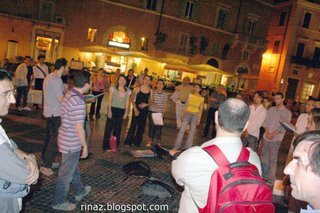 I then noticed a stand with a cartoonist drawing caricatures. Admiring his style, I persuaded Cartcart to have a caricature of us together. He was initially shy, but after much insistence on my part, finally agreed.

“Smile! Bigger! Smile again!”, directed the cartoonist as I gave out a grin and looked out at the statues and buildings around the Piazza.

Me : The place has changed a little bit

Me : Yes, I see renovations in some of the buildings.

At length, the artist was done and we took a look at the completed picture. 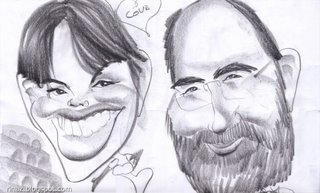 I think the cartoonist did Cartcart really well. The facial features, the beard, the nose, the eyes. It doesn’t look like me however, save for maybe the hair.

We then walked to the Fontana Di Trevi. By then it was way past midnight and yet there were a number of people around. Most of them threw in coins and took pictures. There was one crazy enough to dip her legs in the fountain and posed for a picture. A couple even pushed another into the fontana and made themselves soaking wet. It wasn’t allowed though and soonafter a policeman was blowing his whistle and gave a glare.

I looked into my coin purse and to my horror only found 10 SG cent coins. It was something that couldn’t be helped. I threw three 10 cent coins in the fountain. And then sat down to hug and cuddle with Cartcart as we looked at the tranquil fountain.

It was a beautiful night. It was a moment that I didn’t want to last.

15 Replies to “Waking up from a dream”