My night classes started already and I was very pleased to see that the General Paper lecturer that taught me last year, Mr Chako, was the one who will be guiding us again this year. There seemed to be just a handful of my previous classmates joining in this year. Majority of them, I’m seeing them for the first time.

Some of them were A level retakers, I realised. The mood was casual, however, I could sense that it was a tinge more serious as compared to last years where there were more happy-go-lucky people.

I am surprised that the ITE department allocated us to the 4th level instead of the 1st level where we were used to. Apparantly, the students at Monks Hill Secondary School, the school where we used for night studies, complained that the classes were always in a dirty state when they come back to school the next day.

I wasnt pleased at having to climb up so much staircase after a hard days work. It was tiring having to go for a one hour bus journey and then walking such a long distance from the bus stop to the school. But what made me extremely displeased was that there were no proper facilities on the 4th floor. There isnt any projector where the lecturer could use to give his demonstrations.

I’m quite appalled that the school would do that. I can vouch for myself that the classes that I passed by had no evidence of being littered nor messed up.

The least that the principal could do was to at least give a warning before implementing such a harsh treatment like that. We’re paying students. Yes, I realise that we are heavily subsidized but the least we want is to have proper facilities for our lessons.

But anyway, it was always an interesting lesson (as always) in which we discussed about the different reasons why people would commit euthanasia. He states 2 different examples:

Firstly, Ramon Sempedro, a Spanish man whom became completely immobile from the neck down due to a diving accident. For 27 years, he enjoyed the support from his family and friends and kept his mind sharp through reading, but finally succumed to depression and wanted to die with dignity.

Secondly, was an exerp from S. Rajaratnam, a former previous deputy minister of Singapore, who recently passed away, wrote:

“This brings me to the question of human rights. The list of rights is growing, but one important right is absent from the list – the right to die with dignity. Neither law, the Constitution, nor even the United Nations Charter of Human Rights makes any reference to a human being’s right to die without indignity and with the least possible pain. Dying should not be prolonged torture”

To what extent does committing suicide be justifiable?

I’ve been stressed out trying to book a plane ticket all week now. Fare.net finally responded to my email but I couldnt get to the discounted Emirates flight that I wanted as they claimed that it was fully booked and adviced me to book a higher priced plane ticket with another company. So I called up some agencies from the namecards that I acquired from the Natas fair and guess what was the response?

Huh? But the salesperson at the counter at the Natas fair said …

Then I finally gave up. Fine. I’ll use Zuji again. And then I booked a flight with KLM and then I realised that KLM gave me a voucher last year. I’m sure I could use this and so I called up the Customer service. Only to find out that they dont accept vouchers and that If I wanted to do that, I had to book with the airline themselves.

So I quickly checked the KLM website. Guess what? The plane ticket dropped from the initial $1.2k to $950! I was fuming! And my heart palpitations started again …

And I quickly tried to do a reservation with KLM instead. But they couldnt process the transaction. Zuji still kept my money and they will only refund it back in 7 working days. In the meantime, I cant do anything with my money being stuck and I dare not spend anymore money with my examination fees, my tuition fees and other payments that I had to do …

O I’m so stressed. Whats wrong with airline agencies? Why do they pressurise me so? This must be some kind of devious torture for us to want to book the ticket fast but dangle a carrot every now and then with a cheaper plane ticket.

O my heart … be still. You’ve been beating so fast, a Bollywood MTV couldnt catch up.

Anyway, something nice did happen this week. Sujimi, a former newsreader and currently a producer for the tv show, Hanyut, a reality tv drama came over to the workplace. He did an interesting talk and a demonstration for the students. I quickly asked for a picture before he ran away for his next appointment. 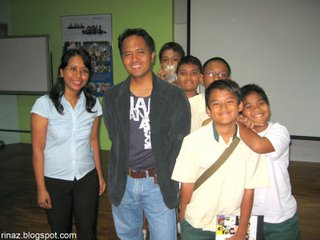 How come celebrities seem to always come when I’m in my glasses and looking very mousy?!?!

2 Replies to “Of night classes and flight agencies”