Went to work as usual today. I didnt put on any make up as my face was acting up again and I didnt want to aggravate it any further. Putting on my glasses, I left the house looking very plain jane.

Anyhows there were some chatter in the office this afternoon but since I was swamped with alot of things to do, I didnt pay too much heed.

“He’s a young man, want me to introduce you to him?”

After a while, I heard someone calling me

“Marina …. Marina I need your help”

I looked up from my typing. “How can I help you, Mr Ong?”

“I need you to take some pictures for me in the auditorium if you are free.”

I didnt have my regular EOS 350D with me, but still had the trusty Ixus 750 that I had on the work desk. In the late afternoon, I waited at the foyer for the guest to come and I noticed a reporter from the Today newspaper and some professional photographers. Just who on earth is coming? I wondered furiously.

After a while, a grand champage silver car arrived and out came a tall man. His assistant took out a huge bag full of golf clubs while he bantered with the principal, the minders and some of the school heads. I then learnt that his name was Nick Dougherty. 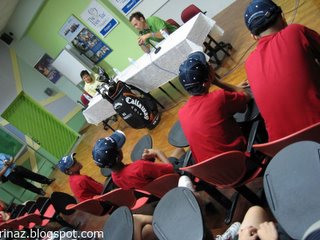 He sat down in the auditorium and began his speech. About how he started to golf while he was 4 years old. How at 15, he was coached by Nick Fowler and how at 21, he became a professional golfer. We have a celeb in the school! Oh my!

He’s now 23. I was a little surprised as he looked a little mature for his age.

The students then started an open mic question session. It was quite interesting to note the way that they behaved then is vastly different. Even the fiercest teacher probably couldnt have the same serenity and rapt attention as what I noticed then. Even the way that they talked is different. (By the way, it seemed that the school had a golfing society, I wasnt aware of that)

“Mr Nick Sir. In your opinion, how were you able to stay focused and determined even though you are faced with the type of stress and blocks that you have now?

Goodness. You kids dont sound normal. Did someone kidnap you and replaced you with robots? 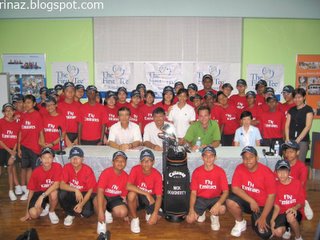 Another curious thing I noticed was the “Fly Emirates” tee shirt and cap the kids were wearing …. Hmmmm

Anyhow, after the question and answer session, Nick Dougherty invited the kids to the school field where he displayed some techniques. He wowed the people present at how accurately he was able to aim at a long distance. 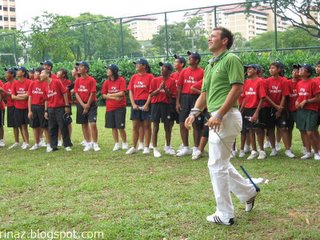 “Hit that grey wall there Nick”

He took an aim and without any difficulties, greacefully hit the wall, which was about 500 meters away. It was nice to see the kids looking so excited and thrilled. He did an autograph session with the kids later on and it seemed like the kids didnt want to let him go, and they kept clamouring over him. 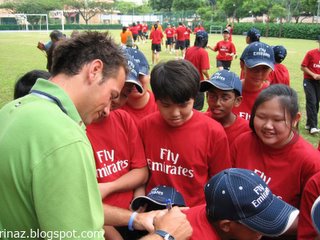 Hey, even I joined in to have a piece 😛 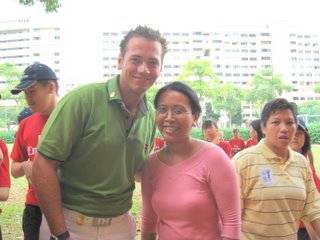 Initially I felt very self conscious and very aware of myself but then I thought to myself that Its not every day that I get to take a picture with a professional golfer. So why not 😛 Thankfully he was nice. It was great fun and a little thrilling even. All in all, the day has been wonderful.

End the end of the day, Mr Ong said “Thanks for helping out, Marina”

And I answered, “The pleasure is all mine” 😉