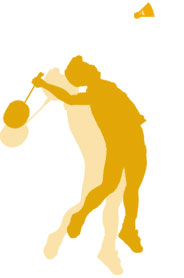 A lovely morning spent playing badminton. I didnt know that that the community center was opened for public just like that. (normally, you’d have to be a member and pay fees) but since mum said that the organization that she was in, booked the hall, I thought I’d drop by.

And oh my gosh. I was totally out of it! Its been at least 2 years since I’ve played badminton so my skills were extremely depreciated. I couldnt even serve the ball. It keeps falling and I cant aim properly. Argh! Need more practise.

Anyway, the chingay parade yesterday was quite nice. It was super crowded! People everywhere. To the left of me, to the right of me. It wasnt pleasant being in the crush like that (especially when there were some very interesting bodily smells abound)

And it was hard to see anything either. Everybody were standing up. I craned my neck. They craned their neck some more. I tried to tip toe and they stood upright even more.

Ahh .. times like these makes me wish I were taller.

Anyhow, here’s a video montage of the parade 🙂 Not a super quality as everyone were taller than me and I had to lift the vid-camera up high over my head and after a while my arms got sore 😛

No point even trying to take a picture hehehe. What do you think?