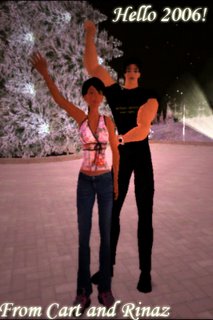 Picture snap thanks to Wishfulone

The start of the new year. My goodness, how did 12 months go by so quickly like that? I don’t think that I even got comfortable with 2005 yet! However, there were a number of highlights in the year 2005 to remember by.

January:
Moving in the new school campus for West Spring Secondary, where I used to work at.

February:
Registered for night classes with the hopes to improve myself. After a hiatus of many, many years.

March:
Entered into very bad depression, caused by many different factors, such as the problems with my previous job, and the psychological effects from my severe acne problem.

April:
Got my canon EOS 350D! And took loads and loads of pictures thereafter.

May:
I was terminated from my previous company. Well, good riddance to them, the only reason I stayed so long was because I liked the previous school I was attached to.

June :
Got a new job in a better, and more established company!
Started my photography classes and my brother’s basic military training graduation.

August
Took a leap and travelled half-way around the world to meet my dearest for the first time in real life.

September
My blog post about my dearest got into Tomorrowsg! Hee hee hee hee!

October
After a long year and a half, I finally passed my Motorcycle Riding Test.

November
My maternal grandfather passed away.

December
After a long engagement, best friend Hema, got married and it was also Cart and my first year anniversary 🙂

Goodbye 2005! It has been a good year, full of interesting and enriching experiences. Some bittersweet. Some beautiful and unforgettable. All that I wouldn’t ever want to trade for anything else.

And what are the things to come in the year 2006? I’ve many things that I planned to do this year, the nimmo and friends webcomics, writing articles for publications, going in depth with photography, trying to learn actionscript and loads of other things …

I’ve many things I’d like to do! But first things first would be my upcoming A level examinations. And I’d like to try to do good this time … and I might have to sacrifice a little.

Anyhow, bro and I was out last weekend with the intention of going to the Vespa Showroom to look at the different scooters that they had there. I’ve always wanted to get green GT200 for the longest time but wanted to see it for real before the actual purchase. 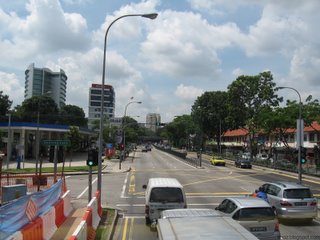 It was a beautiful day. Skies were blue, and big fluffy clouds graced the sky and I was happy and revved up to finally get to sit on my beloved scooter.

To our dismay when we finally got to the building, only to find it locked and closed. It was so upsetting that I had to jerk the gates repeatedly to see if it really was locked. It was as if someone played a prank on us. 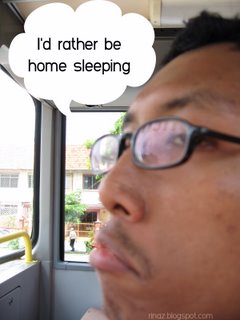 We decided to head back and took the bus that will take us home. Fortunately for us, we saw a huge motorcycle gallery while on the way and I quickly asked Nazry.

He quickly pressed the buzzer and we dropped by and explored the place. Ohh .. there were loads and loads of motorcycles around, in many different colours, shapes and sizes.

There were several men looking around a specific model of a bike and asked the sales person some questions. There were so many bikes! Almost bursting with them that even the exit had at least 10 bikes being displayed outside. Even the walls and ceilings had bikes hanging precariously with metal bars. 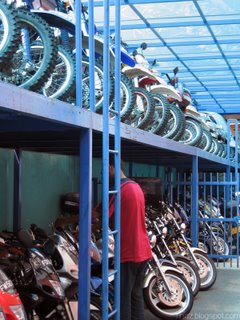 At this time, I was feeling quite overwhelmed by the amount of bikes that there was there. There were so many, that I didn’t know where to start. And the signs on the bike didn’t help much either. I couldn’t understand a thing! All the technical specifications were so alien to me, it felt like the first time I bought a computer (I didn’t have much computer knowledge then) and finally just settled on a computer that seemed easy to use.

But nevertheless, I did see some interesting bikes, some with really large radiator looking devices in front of the engines. Some sprayed to look like a yellow cab taxi. And there were even one interesting bike I saw that looked so plastic, I wondered how it could ever even run.

Bro seemed to fall in love with this one 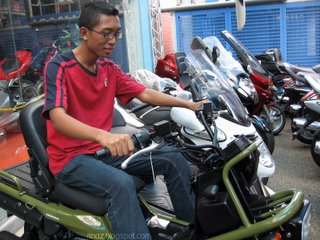 Gosh look at how excited and happy is

It was an interesting looking bike, with footrests. Nazry thinks that it exudes the ‘cool’ factor with the interesting body-frame and the movable seats. Personally, I thought it looks a little odd and a bit flimsy. He asked the salesman, how much the bike costs. “$10k” was the reply. A bit much for me.

We left after spending about an hour or two in there. I think next time, I should ask someone who’s more experienced in bikes to accompany me. It was truly overwhelming.

We went to Jurong Point for lunch when bro felt like playing a game in the arcades. I accompanied him and looked on, while he played this game called “Ghost Squad” and I was amazed to see him shoot down the enemies one by one. 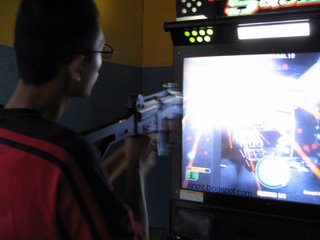 This must be what the army trained my brother for 😛 He was so fast that even before the enemies appeared, he was well prepared to aim and shoot them down. A true marksman.

Bro had a strange costume for his character player though. 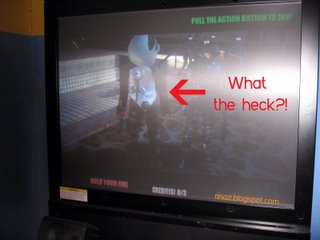 A man in a panda costume with a cat stuck behind him. “What the heck is that?” I asked him, with a note of disbelief. “Why, only high level people could use this costume!”, he replied proudly.

And he looked triumphant as he completed the entire game.

Anyhow, it was a lovely and relaxing day. It was pretty good. And I enjoyed myself. Before I go, I think I’ll post a picture of my mum, just because I like this picture of her. 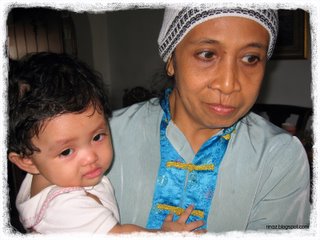