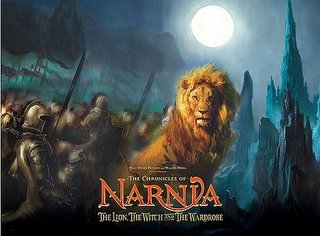 Warning : Contains spoilers from the movie. But if you’ve read the book, I think you’ll know all the spoilers anyways 😛

Back when I was 14 in secondary school, there was a passage in my english book about a little girl who entered a wardrobe and found herself in a wintry forest.

She then encountered a half-man half goat for the first time and soon they became friends. And later on,walked hand in hand to his little house and had tea together.

I was transfixed at reading the passage.

Unfortunately for me, the passage ended there. And I saw the title of the book, right at the end of the passage : The lion, the witch and the wardrobe. I needed to know the story continued. Desperately needed to know. The school library didnt carry that book.So I scoured the biggest libary that I knew of, the Jurong Libary and lo and behold! I managed to find that particular book there and fell in love with the book instantly.

It was hard not to like the book. It was magical and fantastical. The idea of magic, and talking animals and children being the brave, and independent souls was very appealing to me. I could hardly put the book down.

And to my pleasant surprise, there were 6 more similar books that was installed that chronicled from the birth of Narnia, (The Magicians Nephew) till the end of Narnia (The last battle) all of which, I devoured. In fact, I loved the books so much that its sort of been my all time wishlist to have the complete (unabridged) book in hardback.

I re-read the entire chronicles again recently and again was immersed in the storyline. Which got me really hyped up to watch the Chronicles of Narnia movie, which is currently being shown in the Singapore cinemas.

Finally! I’ve been waiting for so long for a Narnia movie to come out! What took them so long? I remember that there were a Narnian mini tv series that was produced by the BBC a while back. Unfortunately I wasnt quite impressed by how the sets looked like. The lady of the green kirtle from the story, the silver chair, didnt look menancing when she turned into a giant serpent. Instead, it even looked comical as she looked puppetish and odd!

But anyway, coming back, I thought it was a pretty good movie. For most of the part, Disney got it right by being true to the story. Details such as Peter’s shield which had a red lion. And Maugrin was the type of wolf you’d believe to be the witches sidekick. Mr Tumnus looked the perfect fawn (but he might seem a little too old)

The characters were well chosen. Lucy (with her freckles) was adorable. Susan and peter wasnt quite the person I’d imagine to be but they were befitting for the roles. Even Edmund looked like the rebel.

As nice it was to imagine the story in my head. It was also quite exciting to see it on the screen.

Thus majority of it, the movie followed the book well. However, for people having read the book (and loving it) – there definitely there will be some qualms about it because some of the scenes that has been imagined would be differently perceived by other people.

For example, I thought all these while Aslan was supposed to be pronounced as Az-lann. In the movie, his name was pronounced as Asz-lahn. but thats just a minor disgretion.

And there are some additional scenes which did NOT come from the book. For example, the beginning part of the war planes, it took at least 15 minutes which continued further on to the parting at the train station scene, though touching, wasnt really talked in the book. I felt that it wasnt quite necessary to the movie.

I also felt that there wasnt much character development in the movie which was quite a letdown for me because there wasnt enough time to connect with the different characters and to get to know them better. My brother, Nazry, who was watching with me at the time, thinks that they had to cut everything down to fit a time frame but if they can do movies like King Kong and Lord of the Rings and even Titanic in 3 hours, why cant it be the same for Narnia too?

In the movie, as wonderful as the creatures were and as well crafted they were. There just wasnt enough time for me to connect with them.

There’s no fishing scene with the beavers! Edmund was riding the sleigh instead of running. How come the santa claus scene with the talking-animals celebrating was taken out? There was no scene where Aslan chides Lucy to help the other wounded battlers. Oh sacrilege!

And there’s hardly any explanation for anything. So I pity anyone who didnt read the book first because I’m sure quite a few would be lost about the plot. There’s no explanation about the deep-magick at the stone table. I am sure that the audience would go “Huh? What was that all about?”

Everything seemed so rushed, and that was my major grouse with it.

But there were some scenes which I enjoyed – the sacrificial scene, which looked quite eerie and befitting. All those goblins and hags and trolls chanting evilly while the witch plunges her knife down in Aslan’s body.

The battle scene was beautifully done. Seeing all those centaurs and other creatures poised and them fighting was really spectacular. Those who have watched the Lord of the Rings will probably see alot of similarities in the battle scene though. Being produced by the same people who did LOTR. Moreover, a small trivia fact – C.S Lewis and Tolkien were friends. They could share the same ideas at the same time. Perhaps Chronicles of Narnia could even be LOTR for kids.

Coming back to the movie, the star of the show and what takes the cake was the white witch herself. I find it amazing to find her so appealing. Cound it be so wrong for me to even LIKE the white witch Jadis?

Personally, she looked pretty (gasps) and she actually looked more like a fairy godmother than an evil witch in the movie. I couldnt help but stare at her fashionably stylish dreadlocked hair and awesome dresses. Her makeup choice is impeccable and during the battle scene, she rides a carriage, driven by polar bears! How cool is that? People usually would have ridden in a horse carriage but not Jadis. Nooo … she’s too cool for that. Only quality polar bears will do.

And man, her fighting moves. The lady doesnt bat an eye and even though she wasnt the Jadis that I imagined her to be, I thought that she was awesome. Just look at how she swings her swords and her magic staff. Like a true professional. Sarumen cant hold a candle to her.

All in all, it was a pretty good movie. I have to confess though, I wasnt happy at the fact that it was now $9.50 an entry to watch the movies now. Movie prices are too steep these days. It doesnt really justify it. I even saw chinese subtitles every now and then (not all of the part of the movie) making me even question about how original the footage was … Ah .. but I dont have a 10 000 inch television screen so for the wide screen experience, why not?

Anyways, talking to my dearest about the book made me realise how many people think of it having Christian influences. I wasnt able to see it previously mainly because usually I’d take a story “as it is” without comparison.

Aslan, he says, is the son of God. In the book he is referred to as the son of ‘the emperor over the sea’. He was a lamb in the 5th book (a christian symbolism. And in the lion, the witch and the wardrobe, he was sacrificed. And then he was resurrected again.

And in the final battle, where the 7 friends of Narnia was in the final world where they entered through a stable. Peter says “he says he didn’t expect that a stable could have such a big place inside and then lucy says in my world i heard that once, a stable contained someone bigger than all of us.

Dearest : And where is Jesus born?

I could see the comparison now. And I feel that it is interesting to note. But I dont think C.S Lewis had the intention to convert people while he was writing the book. To me, it was a story of courage, bravery and loyalty in a magical and fantastical place. No hidden agendas.

Anyways, more on the reviews for the movie here. They could talk about it far better than I could 🙂

5 Replies to “Chronicles of Narnia”