Oh for goodness sakes. Compy decided to have a ‘hard disk error’ on wednesday. And at this current time of writing, my monitor decides to just freeze up and turn black. I hate computers!! … Gosh … if only I was sponsored by sony or fujitsu … I’d have a ball wrecking computers.

Currently borrowing an abandoned monitor from my brother’s desk and am now peering at the tiny resolution … its better than nothing.

Last thursday was a blast! My cousin, Fazillah came over for a photoshoot, along with her friends and Celest from my night class decided to come over too. It was great, and fun and totally crazy. We were laughing and joking and it was a lovely and relaxed mood.

I was having a hard time, trying to persuade people to come over for a photoshoot. Either they were too busy, too shy or just flat out refused to even give it a shot. Hellooo? Free makeover also dont want?

Juli was there! I was really happy to see that she was finally able to make it as the make up artist. Woohoo! She quickly set her materials up and got her magic started. I love the way she does her make up. Flawless and beautiful. Perfetto. Compared to other makeup artists I noticed whom would usually put on a mask of makeup, Juli’s style is lovely, fresh and radiant.

Come and look at some of the awesome pictures 🙂 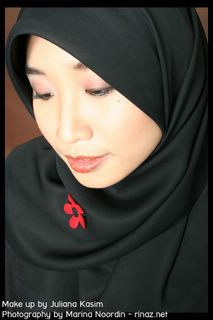 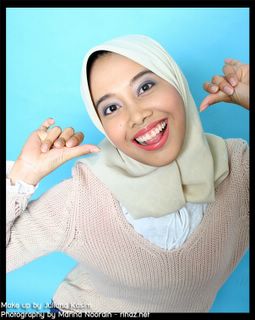 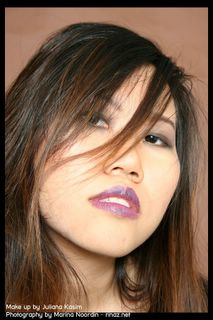 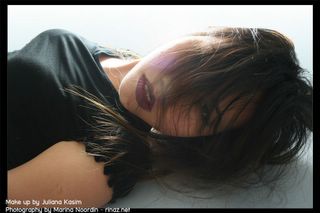 Unfortunately, we didnt have much time to do the makeover. I didnt realise that makeup can take a while to do and we only had 2 hours for the photoshoot. So there wasnt much that I could do. I should have known better from Juli’s final practical

More stuff to update. But I’m having a stiff neck just trying to look at this monitor .. so we’ll see how it goes. Anyway, what do you think of the pictures? 🙂 My last and final photoshoot lesson is next thursday, so email me if you’re interested 🙂

Time for me to get ready for another photoshoot in chinatown later and a chillout session with Zila. Till then 🙂

In other news, coverlooks gave me two vouchers for a makeover. I’m going to ask Juli if she wants it. After all, its always her who is making the makeover, it would be nice that she’ll be the one being made over for once. 🙂

Can I have this look?

I wanna make a “there’s something about Marina” banner ..lol