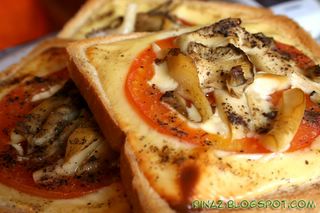 Mushroom and tomato cheesemelts, disgusting to look, but oh so yummy to eat.

I stumbled upon PniiWof’s blog and marvelled at the wonderful dishes that she could whip up with such ease. Lets just face it, I’m not a good cook. I’m the type of person who just literally throw things in the pot and hope for the best. Sometimes I feel embarrassed when I see Cartcart cooking so easily and when he asks me about Asian food and all I could do is to stumble … Cooking should be second nature to women right?

There are a few issues that Mum and I maturely discuss about.Mum thinks that being independent is a level of how well someone cooks and keep house. I kept thinking that how a person could live without the help others is independence. I believe that there is absolutely nothing wrong with using pre-made bottled ingredients. Mum is vehemently against those. At the very least I know how to cook simple things. I can boil water with no problems… I can make Sweet and Sour fish, Chap Chye, Fish Curry, Stir Fried Veggies, Tom Yam Soup, Curry Puffs and I can bake cakes and biscuits *proud*

I’ve always wanted to invite close friends to a home-cooked lunch or dinner. Juli cooked a memorable dinner and Hema cooked wonderful lunch for us. I can’t even remember what I cooked for them. It would be nice to do ala-Jamie Oliver. Maybe I should just procrastinating and just do it. I’ve been complaining about this for ages.

I was watching telley with my brother today and was amazed to see that the Power Rangers were still around!

I’m so amazed. This thing has been around for about 10 years now. Those things were the craze when I was still in secondary school. I swear, Power rangers everywhere. Water-bottles, pencil cases, bags … even the school collar pins we were supposed to wear were replaced with a pink / blue / green / yellow / red / black ranger collar pins. Such were our obsession with it.

I could still remember a little robot that went “ai-yai-yai-yai-yai” I wonder whatever happened to that annoying little thing.

I’m just as amazed because the Pokemon phenomenon,  I didn’t think it went beyond 10 years.

If I made a pokemon, I’d be something like this … heheheh

I encountered the most interesting thing at work a few days back. And I just realised that Flash MX 2004 uses Actionscript 2.0 now. Normally, when I create buttons, I’d just use

Flash MX had an option for me to click and choose the scene that I wanted to go to. So it was pretty easy for me. That Friday I had to crack my head trying to figure out why that code didn’t work and all sorts of error messages appeared. I mean, it’s just a button, it should be easy to code right?

I stared and stared at the screen hoping for some divine inspiration to appear. Nothing. Worse part is, when a HOD was standing behind me all the time looking at what I did. Very stressful when I have to do something with someone looking at me all the time. I had to run away to the computer labs upstairs. Even then, experimenting with the codes didn’t worked.

Then I realised that the new Actionscript version uses a more object orienting programming and that I had to give a name to my button. So now, the code looks like this

Oh I think its time to study programming again … It looks like I just can’t run away from it … I might have faked it in my diploma course, but I cant fake it any more now no matter how much I think programming challenged I am, I still have to try…. Ai-yai-yai-yai-yai. 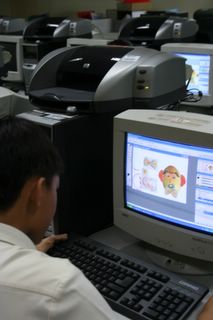 But work hasn’t been too bad for me, the staff are nice and the kids aren’t bad. I’m very surprised to see that the students are quite respectful of each other. I’m serious! I’ve never seen a culture where the students are actually responsive and actually talks normally to each other without screaming. And this coming from a neighbourhood school. Can you imagine that? They actually DO the tasks you ask them to. I couldn’t help but be in such wide eyed wonder.

Of course I was puzzled at why the students were allowed to bring hand-phones to school, even mp3 players. But they have *never* used them in class. *faints in amazement*

Spent the weekends just being lazy at home, watching VCD’s and lounging around at home. I watched the village (interesting!) Meet the fockers (boring) White Chicks (funny!) and Closer (thought provoking) 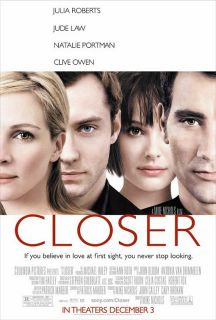 Closer almost came to be one of my favourite list of movie as it was hauntingly beautiful, with an interesting storyline, questioning about fidelities and the subject of true love. I laughed at some of the parts where the two main male characters indulged in seedy online chat. At the beautiful portrayal and the witty dialoge.

Anna: I don’t kiss Strange men.
Dan : Neither do I.

I don’t want trouble.
I won’t be any trouble.
You’re taken!
But you kissed me!
What are you? Twelve?

Why did you swear eternal love when all you wanted is excitement?
It bores you?
No, it disappoints me

Larry : What do you think?
Alice : It’s a lie. It’s a bunch of sad strangers photographed beautifully. And all the glittering assholes who appreciate art say it’s beautiful cause that’s what they want to see. But the people in the photos are sad and alone. But the pictures make them look beautiful, so the exhibition is reassuring, which is a lie. Which makes it all a big fat lie.
Larry : I’m the big fat lie’s boyfriend.

Coupled with the most excellent music from Damien Rice, The Blower’s Daughter. Wonderful, wonderful movie. I like it.

Before I end the blog for today, just a few “what the heck pictures” 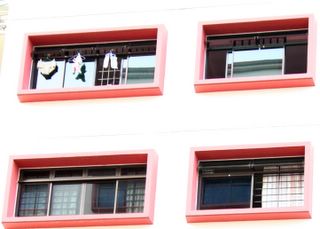 Taken right outside my window the block opposite me… Nice underwear 😛 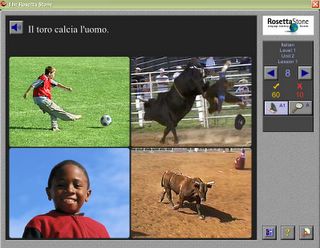 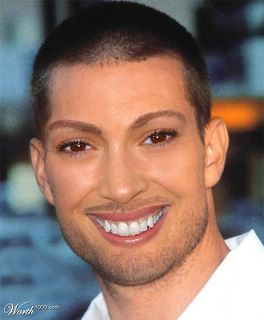 Alicia Milano as a man! *peers*

6 Replies to “My inadequacies”